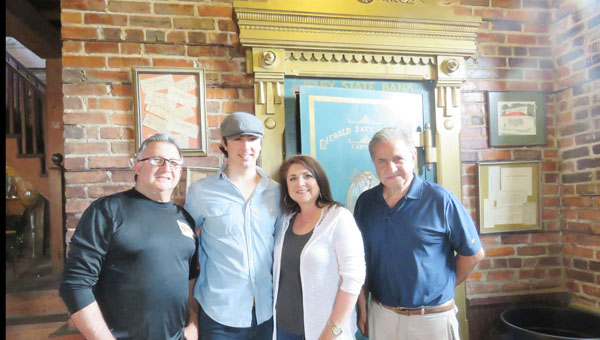 The Falgoust Family, including Armant, left, Peyton, Donna and Uncle Carl Monica stand in front of the old vault in the Gary State Bank Building in Garyville. They are the organizers of the annual Sings and Strings Jam Festival, which is open to all musicians. (Lori Lyons/L’OBSERVATEUR)

GARYVILLE — Peyton Falgoust had worked for months putting together the first Sings and Strings Festival in 2014.

The 17-year-old high schooler, his dad Armant, mom Donna and uncle, Carl Monica, plus countless other volunteers had organized the food booths, got the judges for the cook-off and rounded up crafters to show their wares.

All they needed was some musicians.

“We were all sitting there waiting,” Armant said. “We had the food, we had the beer, the crafters. I was nervous though. I said, ‘Peyton. What if nobody shows up?’ He said, ‘Don’t worry, Dad. They’ll be here.’”

Peyton’s faith in his fellow musicians was rewarded as more than 50 of his friends, family members and complete strangers — including one with a metal tub and a stick — made their way to Historic Garyville to join each other in what has been billed as the area’s biggest acoustic jam fest.

It is getting bigger every year.

Peyton Falgoust dreamed up the Sings and Strings Jam Fest when he was just 12 years old. Proceeds will go to help restore and reopen the Garyville Timbermill Museum, shown in the background.

More than 100 musicians of various talents showed up last year and at least 80 have already signed up for this year’s event to be held April 2.

The buildings in the historic area will each have a stage, including the old Fatty’s Restaurant, the Bank and Navarro’s.

This year an outdoor stage will be added to the mix.

“The folks at the cook-off couldn’t hear the music, so we added that,” Monica said.

There also will be a 5K run/walk to be conducted on the newly completed nature trail. The cost to enter is $25, which includes admission to the festival.

Admission is free for musicians, $5 for music-lovers and groupies.

The event is a benefit to help restore and reopen the Garyville Timbermill Museum, also located in the historic district.

It also is a chance for musicians of varying levels of skill — and talent — to join other musicians from various genres in a giant jam session.

“We want people to come with their instruments no matter who you are,” Peyton said. “Anybody can come. Everybody is kind of a headliner. You don’t even have to be good. You just have to want to play. A lot of people might not have anybody to play with them. This gives them a chance to meet other people, try different things and have some fun.”

Roy Amedee of Reserve went to the event the first year, but left his guitar at home.

“I guess I was a little too embarrassed,” he said. “I had a little self-doubt. I didn’t think I was good enough. I regret not bringing my guitar that day.”

The second year Amedee returned with his guitar and had a blast.

“It’s just fun,” he said. “It doesn’t matter if you’re 6 years old or 70. It doesn’t matter what you play. You can bring a stick and a bucket. We all just come together. Everybody shows what they know, I show what I know and we all learn from each other.”

Thanks to Sings and Strings, Amedee and a couple of his friends formed a little group called “Simply Us,” which is now available for parties and other events.

“It all came about thanks to this,” he said.

Peyton, now 21 and a student at LSU, said he got the idea after attending an open strings festival in Madisonville.

On the way home, he told his family, “We could do that.”

Armant agreed and said, “We’ll call it Sings and Strings.”

It took a few years and a couple of ideas drawn out on the back of a Fatty’s food ticket, but the family finally got the festival off the ground in 2014.

Peyton said he had a vision.

“I just want musicians to just come and meet other people they didn’t know about, that are far away or not far away, that they can just share some type of mutual love for music,” Peyton said. “They can have a conversation through music.”

My granddaughters had the opportunity to go to Bay St. Louis last weekend. They played in 60 degree water, then... read more