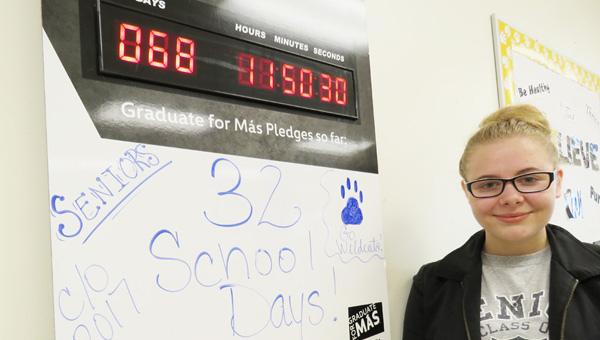 Paige Edler stands in front of the senior countdown clock at East St. John High School. The standout student is continuing her education this fall at LSU.

RESERVE — There have been some tough times in Paige Edler’s life.

She was the first child born to a young mother and father, neither of whom finished high school, then rather quickly became the oldest of five children.

After her parents separated, there wasn’t always a steady income or a stable home as they bounced from place to place.

“The biggest issue was housing,” she said. “We moved around a lot. I think I went to seven or eight schools between first and ninth grade.”

Eventually, Edler landed with a grandparent in St. John the Baptist Parish and, like the flower planted in the proper garden, she has thrived.

Now Edler is a senior at East St. John High, where she has earned spots on the Honor Rolls, joined the yearbook staff and the Beta Club. She even found herself cast in a local production currently in rehearsals.

“I didn’t even know we were having an audition,” she said.

Last month, Edler shined her brightest as she was named St. John the Baptist Parish High School Student of the Year.

As part of the process, Edler had to write a short autobiography, explaining to a panel of judges what makes her special. She said she wrote about overcoming her rough beginnings to make something of herself with the support of her family.

“I’ve been through a lot in my life,” Edler said. “It made me want to push harder. I wanted to be the one to be able to get my education and further myself. You have uneducated parents, a lot of people would see us like that. It was more of a process for us. They always told me I had to do good in school. Just seeing how they struggled, I didn’t want to have to struggle. I’m not just doing this for me. I want to set an example for my siblings.”

East St. John principal Tabari Simon said all he sees in Edler is the nearly-finished product.

“I don’t really notice a rough start,” he said. “How can you see the rough start if the person never allows you to see it and all you ever see is the product in front of you? You often don’t know a person’s story. All you see is character shine through.”

Edler, 17, the daughter of Michelle Orgeron and Jules Edler III, said being named Student of the Year is her highest accomplishment.

“I feel like it’s one of the last things I get to do as a high school student,” she said. “I went up against some amazing students, including one of my best friends.”

It also gave her a bit of redemption. She previously was Student of the Year as an eighth grader at Emily C. Watkins Elementary School, but did not get the district not.

“This made up for that,” she said.

Edler will enroll at LSU in the fall (and she has at least one scholarship to help pay for her expenses), to study business marketing and management.

“That’s such a big thing right now with all the technologies,” Edler said. “I think it’s going to be a way for me to maybe open my own marketing business to help market other companies. Obviously, I would have to manage it so — marketing and management.”

She got her acceptance packet from LSU shortly after completing her requirements for Student of the Year competition, but before she got the results.

“So I was super excited about that,” she said.

LAPLACE — Led by its Workforce Development Committee, the River Region Chamber of Commerce is working to soon release its... read more