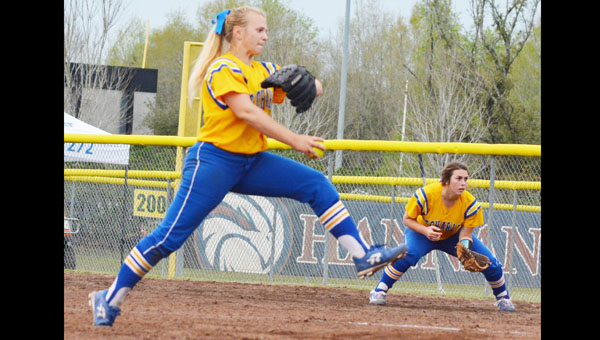 LAPLACE — The town of Sulphur must have wondered what the heck happened to St. John the Baptist Parish last April.

For the first time in more than a decade, no team from St. John advanced to the annual State Tournament in Sulphur.

More specifically, there was no Riverside Academy or St. Charles Catholic team there.

One or both of those schools has reached at least the quarterfinal round every year since 2005 and both have come home with a title.

Last year, after successful regular seasons built high hopes, both lost in the second round.

It was devastating for St. Charles Catholic coach Ty Monica when his team lost to Mangham 3-2.

“That may have been the toughest loss of my entire coaching career,” Monica said. “Last year’s team was one of the best I’ve ever put on a field, and it’s a shame they never got to step foot in Sulphur.”

So when the Lady Comets got to work last month, it was with Sulphur in mind.

“That’s what we talked about the first day of practice, getting back there,” Monica said. “Our motto this year is, ‘The R factor. Respond.’
Monica began his 11th season with a solid group of starters back from a team that went 23-4 last year.

Among them are junior pitcher Jade Brady, junior infielder Caroline Julian (.478) and junior outfielder Pylar Zeringue (.493), who all were members of L’OBSERVATEUR’s All-St. John Parish team.

“Everybody asks me if I have pitching,” Monica said.

He has two — cousins Brady and Kelsie Williams, who will split time in the circle.

“They’re getting it done,” Monica said.

The Lady Comets entered the week 9-2 after going 3-0 at the Archbishop Hannan tournament.

The team that led the nation in home runs with 44 earned itself the nickname “The Bomb Squad.”

This season, head coach Tamra Regalo would be happy to see her team repeat that feat, or not.

“I’d be just as happy if we were the ‘Line Drive Squad,’” Regalo said. “As long as we’re winning.”

Heading into this week, the Lady Rebels were 7-1 and already have hit 18 home runs. They’ve had two games in which they finished with six homers as a team.

“We’re starting to see the ball like we did last year,” Regalo said. “Some of the same people — almost all of them, actually — have hit home runs.”

The Rebels are not short-handed, however. St. John Player of the Year Lexi Johnson, who hit nine home runs last year, returns as a freshman.

The East St. John High LadyCats have never made the trip to Sulphur. Second year coach Lester Jenkins is hoping to change that.

He’s got a solid nucleus of players returning, including junior middle infielder Taylor Lipps, who is coming off of the school’s most successful basketball season in recent years; sophomore Erriyel Cemelien, who played nearly every position on the field last season; and senior Tash’ianna Robinson, who drew 18 walks last season.

West St. John High has a long way to go to get to Sulphur.

Kenneth Streeter, who was an assistant last season, is the head coach now.

“We’re really starting from scratch,” Streeter said. “Being a small school, competing is our whole deal. We have to compete against other sports. We want to compete, we love to compete.”

Streeter said there is a good group returning from last year, but they’re all still very young.

The LadyRams will consist of an eighth grader, three freshmen, three sophomores and two juniors.