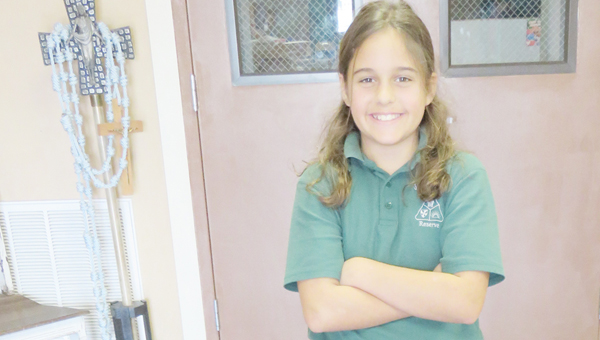 Kate Brady stands near the St. Peter Catholic School insignia in the school’s lobby. The fifth grader has become a school fixture through involvement in many areas.

In fact, some would call the fifth grader at St. Peter Catholic School tiny.

But she certainly has some big dreams.

In the meantime, Brady, who is 10 years old now, likes to help out around her school.

“Although small in stature, (Kate) is big on aiding where needed,” St. Peter’s principal Marie Comeaux said. “Kate is here for a lot of different functions, so she’s always helping to pick up or clean up. (She) can be seen before and after school helping to set up before special events and staying long afterwards cleaning up after these events. Whether it’s setting up tables and chairs or sweeping floors and taking out the trash, Kate is not above doing it all for the sake of her school. She is quick to lend a helping hand and doesn’t need to be asked twice to run errands for teachers, or help younger students with tasks.”

“After school I like to help out with fundraisers and stuff,” she said. “I’m in Beta Club, so I do get service hours for it, but I like to do it anyway.”

Kate is making her mark at St. Peter’s in other ways, as well. She serves as the fifth grade class representative on the student council, plays on the soccer team and is in the drama club.

She also loves to dance.

“I started dancing when I was 3,” she said. “It’s just something I love to do. I have fun and I get to work with so many talented people.”

Kate is a member of the Dance, Etc. competition team and has received numerous awards over the years.

She loves dancing so much that, when it came time to do her social studies project, she decided to do it on the history of tap dancing. She won first place and advanced to the regional fair at Nicholls State University.

“I did it because I’m a tap dancer myself and I wanted to learn more about the culture,” Kate said. “I learned that African Americans invented it and they used wooden tap shoes. Today we use leather tap shoes. They had people who carried the style on.”

Kate also has used her time on the stage to delve into pageants.

Last year she worked with her family while running for Spring Pageantry, which raises money for the school.

She was named the Pageantry Queen.

Kate said she likes to play dress up, but gets nervous sometimes.

“I’m thinking, everyone is staring at me,”

Comeaux said Kate amazes everyone by participating in many extra-curricular activities, while still maintaining an honor roll status that qualifies her for the school’s Junior Beta Club, where she serves as club secretary.