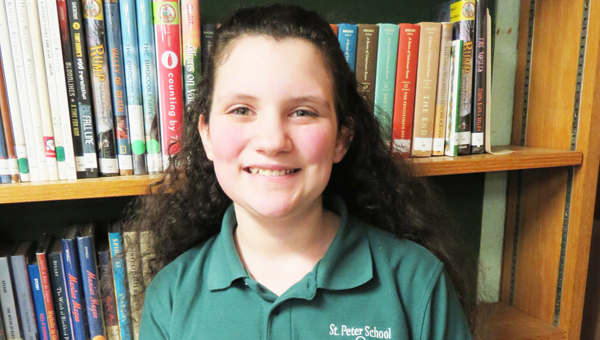 As a seventh grader at St. Peter’s Catholic School in Reserve, Jenna Hickman is involved in a lot of activities.

She is in the Beta Club, Media Club and is part of the school’s Pre-K Buddy system, in which the older students act as role models to an assigned Pre-K student.

She also volunteers to work in the school’s library, something she really enjoys. She even has earned the title of Junior Librarian and often gives up her recess time to help out.

Jenna’s favorite thing to do, though, is be an altar server during church services. It’s something she started about four years ago.

“I just always thought I should try it because my sister was also in altar serving,” said Jenna, 12. “When I was in third grade I was allowed to go into altar serving. I’ve been doing it ever since.”

Jenna, the daughter of Alice and Gary Hickman of LaPlace, has become a regular server at St. Peter’s Church, one of the best, according to Father John Marse.

“She is very conscientious, very dedicated, loyal,” Marse said. “She is always ready and willing to do whatever needs to be done. If someone needs a replacement, she is one of the first to volunteer to take their place.”

Marse said he tells his altar servers to try not to get nervous.

“I just tell them to go with the flow,” Marse said. “Everybody makes mistakes. Just keep going and no one will know.”

Jenna said she was nervous at first, but now she is a practiced pro, having done weddings, funerals and special Masses, such as at Christmas and Easter. She even served at the wedding of one of her classmates’ parents, she said.
“I like how it’s helping Father,” Jenna said. “I like how I have somebody who depends on me.”

Jenna’s dedication shows in other areas as well.

She said she loves to read so she loves books. She even enjoys putting them back where they belong in the library.

“I like reading and I like organizing things, so I come and help shelve the books,” she said. “They have different sections for fiction, non-fiction and the kiddie books.”

Jenna also likes math, mainly because it comes rather easily to her.

“It doesn’t take much studying for me because it’s just problems,” she said. “If I already know how to do it, I don’t really have to do a lot of studying after class.”

Her math skills have her thinking about pursuing a career as an architect.

“I like to draw, I like the idea of designing a house and I’d get to use my math skills,” she said. “I think it would be a good job for me. I’m just thinking about it, though.”

Whatever future path she may choose, Jenna seems to be destined for a life of serving others.

“Jenna is very dedicated and committed to her service and responsibilities in both Media Club and as an altar server,” said Media Club sponsor Jane Clement said. “She takes pride in her service and is always eager to step up and do her part, and more, when requested. Jenna works hard both in and out of the classroom, and her inner light shines bright in all that she does.”

“I like how it doesn’t have too many people and I know most of the people,” she said. “It’s like we’re a gigantic family. We’re nice to each other, we help each other and we depend on each other.”

EDGARD — The 2015 armed robbery of a pizza man in Reserve led to jail time, according to the St.... read more