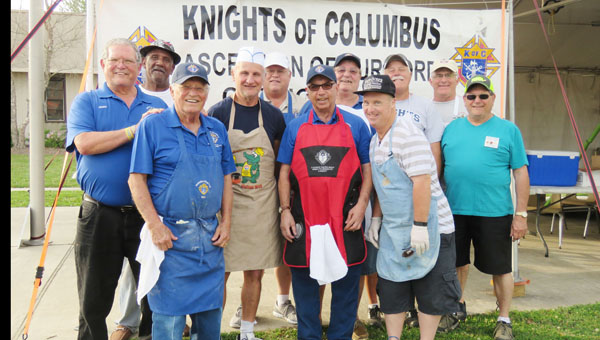 LAPLACE — There’s something fishy going on in LaPlace.

Right in the middle of Cambridge subdivision, underneath the big white tent at Ascension of Our Lord Catholic School, Mike Abbate is ordering folks around like the Grand Poobah.

He has Marty Fernandez doling out potatoes and George Becnel handling the corn. Early Duhe and Bump Perrin are waiting their turns.

In the back Elliot LeBlanc is boiling, Arnold McGill and Elton Remondet are battering, Lloyd Schexnayder is frying and Frank Sipos is doing the grilling.

Up front, Calvin Arceneaux is manning the register and James Poche is directing traffic. In the meantime, the whole gang is cutting up and having fun as they wait for the hungry to find them.

During every Lenten season, the local Knights of Columbus Council 9623 holds its annual Fish Fry, offering good Catholics (and anyone else) their meatless meals every Friday, except Good Friday, from 10:30 a.m. until 7 p.m. — or until they run out. Hungry folks can drive right up and order plates to go for less than $10.

Diners can get a 2-fillet dinner with boiled corn and potatoes for $8 or a single fillet dinner for $6. Extra fillets are $3 each. Soft drinks also are available.

Grand Knight Abbate estimates they sell around 400 plates every Friday.

It’s a tradition that goes back more than 20 years.

“We were just looking for a fundraiser,” Abbate said. “We just decided to try it out.”

Back then, they just had a bunch of black iron pots.

“That wasn’t too efficient,” Abbate said. “We weren’t able to control the temperature, so we moved up to modern equipment. It works a whole lot better.”

Now they have chef Schexnayder manning three deep fryers under the tent and LeBlanc handling the two large boiling pots.

In the “kitchen,” McGill and Remondet are overseeing the “secret recipe” that turns those 7-ounce catfish filets into strips of flaky, golden brown deliciousness. They also offer the healthier grilled option.

Fernandez, who has special needs, is one of the group’s newest members.

Of course the main man is Schexnayder, who has the hottest job — frying up the fish all day.

“I enjoy cooking. I love to cook,” said Schexnayder, who is the chief cook for the Knights of Columbus. He also led a group that recently went to New Orleans East to feed residents who were struck by a tornado last month.

While the group is raising money for a good cause — the Father Benny Piovin Scholarship fund for seminarians who are studying to be priests — they also are having a real good time.

“I enjoy the camaraderie of all these guys,” Abbate said. “They cut up all day long. Also, it’s a community thing. You see all your friends who come through. We have a ball.”

Michel: Our clothes can define our disposition, outlook

Although my granddaughter Adeline loves PreK 4 and the uniform she wears to attend school each day, she has equally... read more