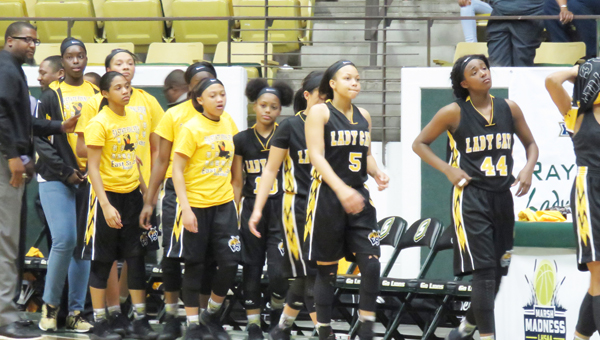 Disappointment shows on the faces of the East St. John High LadyCats after their 49-45 loss to Barbe in the Class 5A semifinals Thursday night at Southeastern Louisiana University in Hammond. ESJH, the No. 12 seed, made its first semifinals appearance since 2006. (Lori Lyons/L’0BSERVATEUR)

HAMMOND — A lot of memories came back to East St. John High School girls basketball coach Stasha Thomas-James Thursday night and not all of them were good.

Thomas-James was thrilled to bring the No. 12 seed Lady Wildcats to the Southeastern Louisiana University Center for the Class 5A semifinals for the first time since 2004, when she was a player on the team.

Just like then, though, the trip ended in disappointment.

“It was great getting here, but man it’s tough coming up short,” Thomas-James said.

When the game went into overtime, Thomas-James said she still had confidence.

The Wildcats had gone into overtime last week against Denham Springs and pulled out a 42-40 win to punch their ticket to the semifinals.

“I’m thinking back to that overtime when we jumped up on them,” she said. “I was feeling good.”

This time, Barbe came through when it needed to with the help of its outside shooters. Brandi Williams led the team with 22 points, but it was Ashlyn Poole’s 3-pointer that gave Barbe a 43-41 lead with 1:29 remaining in regulation.

Meah Monroe tied it back up at 43 on a jumper with 15 seconds remaining, but Taylor Lipps missed a desperation shot at the buzzer.

Thomas-James, now in her second year as head coach of her alma mater, said turnovers proved to be her team’s undoing, along with some key missed shots.

“We came out kind of all over,” Thomas-James said. “I told my girls, if we limit our turnovers, then the outcome of the game would probably be different.”

The Wildcats had overcome early jitters to take a 15-7 lead at the end of the first quarter.

Both teams had more turnovers than points in the opening minutes.

Tutt finally broke the scoreless tie with a 3-pointer with 5:25 on the clock. Lipps closed the quarter with back-to-back 3-pointers.

The Lady Wildcats held a slim 20-19 lead at the half after being outscored 12-5 in the second quarter, and led 27-26 after three periods.

The Wildcats finished the season 25-7. Barbe goes on to face undefeated Destrehan in the championship game at 8 p.m. tonight in Hammond.

Thomas-James said this is not the end of East St. John’s basketball success.

“We’re going to be pretty good for a couple of years,” she said. “Next year I think we’ve got a good chance to be back here, as well.”

The Comets, who had not made the playoffs since 2007, reached the quarterfinals for the first time in school history.