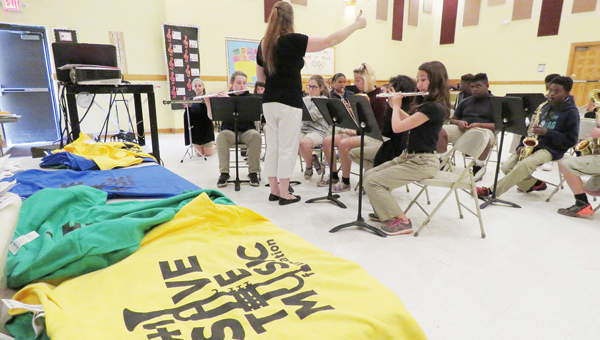 LAPLACE — While most students throughout the area will be enjoying their Mardi Gras holidays next week, students from John L. Ory and Emily C. Watkins will be giving up one of their days off to help celebrate their superintendent.

Kevin R. George, superintendent of the St. John the Baptist Parish public schools, is set to receive the VH1 Save the Music Foundation’s 12th annual Administrator Award for Distinguished Support of Music Education.

Haleigh Hudson, from left, Brianna Bourgeois, Kiley Cooper and Emma Savage are seen in front practicing. Pictured in back, from left, are Layken Epperly, Victoria Upshaw and Martina Stevenson.

The award will be presented at the School Superintendents Association’s annual National Conference on Education March 4 at the Ernest N. Morial Convention Center in New Orleans.

George was chosen for his “deep commitment to providing St. John the Baptist Parish students with music education as part of the community’s well-rounded curriculum,” according to a press release.

“Mr. George’s work in the St. John the Baptist Parish School District has been a shining example of what public school music programs should strive for,” said Chiho Okuizumi Feindler, senior director of programs and policy for the VH1 Save The Music Foundation. “We are thrilled to recognize Mr. George for his unparalleled support from the top. His commitment ensured equitable access to music and the arts for students district-wide.”

George said the first thing he did when he learned of the prestigious award was to call all the music teachers to thank them.

“I told them, ‘Hey guys. It’s because of you all that I am getting this award,’” he said. “I am humbled to be recognized just for doing what’s right. A national organization is honoring little old St. John Parish.”

Under George’s leadership all public schools in St. John Parish now have full time music teachers. By next year, all will have full bands.

“I put the arts right up there with the four core subjects,” George said. “We always want to cultivate and nurture that artistic side of all of our kids and do all we can to support them.”

As part of that endeavor, VH1’s Save the Music Foundation has donated more than $50 million to more than 2,000 public schools across the nation.

It was just five years ago that the foundation made its first donation to St. John, which had no district music programs in any of its kindergarten through eighth grade schools.

Since then, the school district has implemented music programs in phases. Just last year John L. Ory received its donation of 35 instruments and music books from the foundation, along with West St. John Elementary and Garyville-Mt. Airy Math and Science Magnet School.

“Oh my gosh, I’m very proud of my kids because they’ve only played since August,” Ory band director Connie Sparacello said. “This is the first year we’ve ever had the band program at Ory. These kids have never had music before. For them to start in August, to be able to have a Christmas concert, now they’re playing for a national convention, they’re going to play in the Mardi Gras parade for school, plus the spring concert, plus the (parish) showcase, it’s a really awesome thing.”

Watkins got its program started in 2015 under Howard Gauley Jr.

Over the past week, the students from Watkins and Ory have gotten together to form one band, which will perform for George at next week’s conference.

“I love performing,” said Ory flutist Emma Savage, 12. “It’s like my favorite thing in the world to show what I’ve learned.”

Emma said it was a little strange to get together with students from the other school, but everyone quickly caught on.

“It was kind of different,” she said. “They taught things different.”

Kiley Cooper, 15, said the combined band is a great idea.