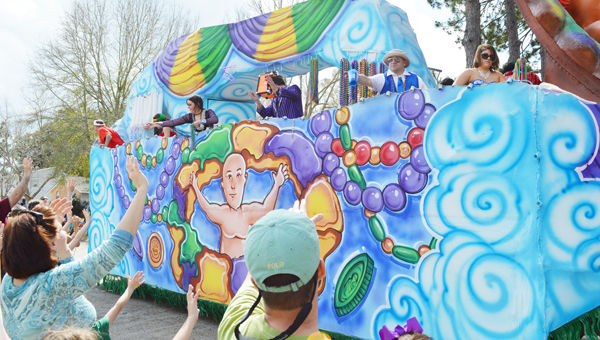 (Editor’s note: This story originally published with the incorrect starting time for Krewe of Tohwahpahsah in Reserve. The parade will roll at noon Saturday/Feb. 25.)

RESERVE  — Joshlyn Jacob will be up Saturday morning at about 5 a.m.

Even before she finishes her morning coffee, Jacob will start cooking roughly 60 hamburgers, 40 hotdogs and probably 20 pounds of smoked sausage to feed the 60 or so family members and friends who will converge on her Reserve home to watch the annual Krewe of Tohwahpahsah Parade.

“It’s all family and friends,” said Jacob, who has been hosting a parade party since she moved to Reserve in 1990. “We usually have around 60 people that come and stay, plus a bunch who come and fix a plate and leave. I don’t know how it got this big.”

In LaPlace, Reggie Green will head off to church as he does every Sunday morning but will hurry home. He wants to be sure he’s able to get back to his Greenwood Street home before the Krewe Du Monde parade gets there.

He also will be hosting a slew of family and friends for the day.
“It’s real convenient,” he said. “I don’t even have to leave my yard. It comes right to my door.”

While New Orleans spreads its parades over a few weeks, Mardi Gras comes to the River Parishes all in one weekend.

St. John the Baptist Parish hosts two parades, one Saturday and one Sunday.

Parades also will roll in St. Charles Parish on Saturday and Sunday. One parade rolls in Lutcher on Mardi Gras Day.

The first to roll in St. John Parish is the Krewe of Tohwahpahsah, which will meander through the streets of Reserve beginning at noon Saturday.

The parade, often a conglomeration of cars, trucks, floats and even boats designed by individuals, begins and ends on Railroad Avenue in front of Riverside Academy.

Nikki LeBouef and her sister Frances Sullivan are the organizers of the parade, which was begun by their late father, Lawrence “Noonie” Triche. It has no theme and the parade’s royalty is traditionally announced the day of the parade.

A more traditional parade with floats and bands, Du Monde is sponsored by the LaPlace Lion’s Club. It was founded in 1974.

Sean Roussel will rule as King Du Monde and Alexis Shirer will serve as queen as the parade rolls through LaPlace, beginning at 11 a.m. at Airline Highway and Main Street.

“This should be our biggest parade ever,” said LaPlace Lions Club president Daniel Kurica.

“Every cent goes back into the community.”

In St. Charles Parish, the Krewe of Lul Parade, with more than 30 floats, will make its 40th roll through Luling beginning at noon Saturday.

The parade, which was founded in 1978, begins and ends at Sugarhouse Road and Courville Drive in Luling.

George and Lonnine Jorden Adamietz will serve as king and queen.

On Sunday the Krewe of Des Allemands will begin at 1 p.m. at the corner of LA 631 and Wenger Road in Des Allemands.

Roy and Betty Hogan will serve as king and queen.

The Krewe of M.A.C. (Making a Change) of Gramercy-Lutcher is the only krewe to roll on Mardi Gras Day in the River Parishes.

It is scheduled to roll at 2 p.m. from the Golden Grove Truck stop in Gramercy to Main Street. It will end at Lutcher Elementary School.

The krewe will honor the Lutcher Bulldogs Class 4A state championship football team.