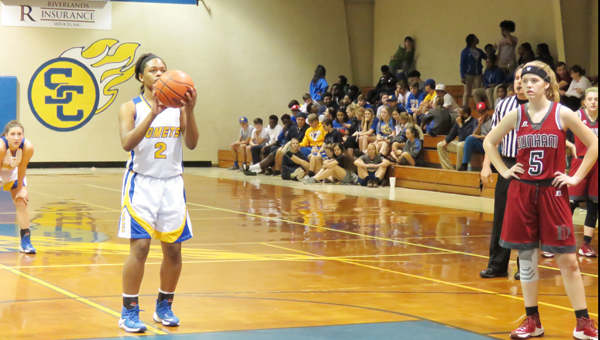 The Lady Comets had already played and beaten the No. 10 seed twice this season.

They knew it would be a hard-fought game between two evenly matched teams.

But Luke and St. Charles Catholic couldn’t foresee the way Dunham came back to take a 44-43 victory Monday night.

Dunham somehow managed to erase a 5-point Comets lead in the game’s final 37 seconds thanks to a pair of 3-pointers, a half court turnover and a put-back basket just before time expired.

It was a series of events that left the Lady Comets, who were making just their second playoff appearance since 2008, heart-broken and their fans stunned.

Yet it was a scenario they had grown accustomed to this season.

“This has happened to us in three other games,” said Luke, who took over the St. Charles team this season after spending three seasons at Riverside Academy.

St. Charles never put the Tigers away but managed to stay ahead for most of Monday night’s contest.

The Comets held a slim 33-32 lead to start the fourth quarter, lost it with 6:31 remaining and regained it on a jumper by Jori Bryant with 5:44 remaining.

Heavon Mamou’s jumper from the side with 2:30 remaining gave the Comets a 39-36 lead, and Caroline Julian’s two free throws with 46 seconds remaining made it 41-36 for the Comets.

While moving up the court against the Dunham press, St. Charles tried to bounce a pass at midcourt. It went for the Tigers.

With just seconds remaining, Dunham got the ball into the lane, where Kristina Khalid-Abasi was ready for the rebound basket just before time expired.

“(She) came across and hit one from downtown and we just didn’t’ get up on her,” Luke said.

“We just lost the shooter and she shot it from downtown and it went in. She didn’t shoot one all game until the end and it went in. We had the ball and we turned it over. I don’t know what happened at the end.”

Luke said she couldn’t find much fault with her team’s effort.

Julian led the Comets with 18 points. Bryant scored 12 points, and Mamou finished with 10.

“I thought our kids played really well,” Luke said. “We did a lot of good things. But look, sometimes the ball just doesn’t quite fall our way.”

It was quite a first season at SCC for Luke.

“We’ll come back next year,” Luke said. “It’s been a good year. I’m very thankful to the kids and the parents. They were very receptive to everything we threw at them. They want to have a good basketball program here. They really do.”

The No. 12 Lady Wildcats advance to the quarterfinal round of the Class 5 playoffs with the win over No. 5 Sam Houston.

The Lady Wildcats will travel to No. 4 Denham Springs at 6:30 p.m. Thursday for the quarterfinals.

The No. 12 seed Lady Rebels also lost a heart-breaker on the road to No. 5 St. Mary’s in the Division III bracket.

The two teams had split  their District 12-2A games during the regular season.

LAPLACE — St. Charles Catholic’s hopes of getting to play for a state championship were dashed Friday when No. 11... read more