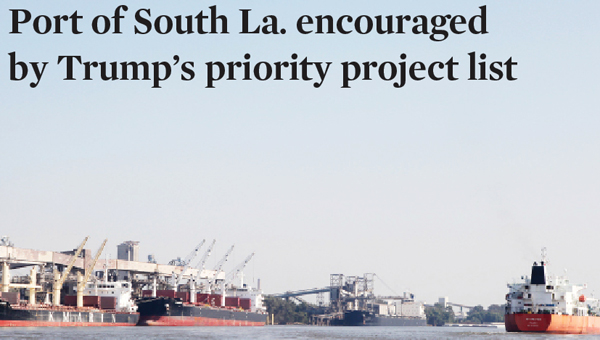 Vessels berthed at and transiting through the Port of South Louisiana are shown recently.

“I know it’s early on in the process, but I am encouraged that (President Donald) Trump’s administration will keep this project on the forefront and will urge Congress to approve it,” Aucoin said.

Aucoin has long been an advocate of deepening the Mississippi River, what he calls critical to the unencumbered movement of cargo and the success of the state’s and the nation’s economy.

Trump recently released a list of 50 “Emergency and National Security Projects,” totaling $317.5 billion in investment and touting the creation of more than 193,000 jobs.

The list includes three Louisiana projects, one of which is the dredging of the Mississippi River.

Projects on the list had to be deemed a national security or public safety “emergency,” “shovel-ready,” with at least 30 percent of initial design and engineering work complete, a direct job creator and a project with the potential for increased U.S. manufacturing.

Although Congress authorized a 50-foot channel depth in 1985, Port officials said the project was never properly funded. The lack of attention to the Mississippi River channel continues to negatively impact ports and the industries that lie upon the largest waterway in the nation, Port leader said.

Aucoin said he is pleased Trump is prioritizing the project, adding, as project seven on the list, the ranking is the highest of the three Louisiana projects and would create 200 direct jobs when begun.

Aucoin traveled to Washington in December to meet key stakeholders, including Dan Slane, who is now serving in the White House as Deputy Director, Infrastructure at the National Trade Council.

Aucoin and Slane discussed issues impacting the Port of South Louisiana, including, and most importantly, the dredging of the Mississippi River.

“I stressed … that ensuring the river is open for business will stimulate impressive economic growth and generate thousands of good paying jobs for working Americans,” Aucoin said.

“It is not just an issue affecting Louisiana; states are dependent on the mouth of the river being properly dredged. It is also a matter of national security. As a country, the Mississippi River is one of our most valuable resources and we must take steps to ensure its continued reliability.”