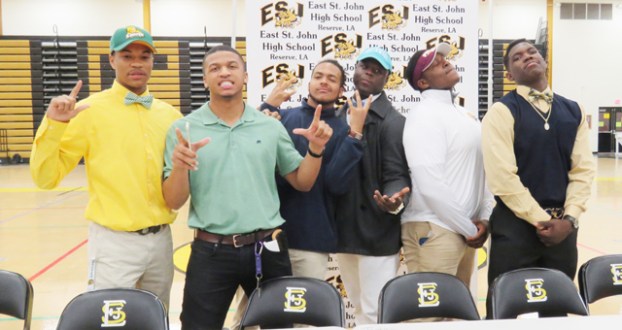 EDGARD — As a dad, Brandon Walters is glad that’s over.

As the head football coach of the West St. John High School Rams, he is too.

One was his son.

“I’m glad this part of it is over, to tell the truth,” Coach Walters said. “It’s been crazy.”

Jamal said he spent a restless, mostly sleepless Tuesday night in anticipation of Wednesday’s ceremony, which was held in the school’s gym in front of the whole student body.

“It felt good to do it in front of the school, people that know me and know that I worked so hard for it,” said Jamal, who chose Nicholls over Tulane, Louisiana-Lafayette and Coffeyville Community College in Kansas. “It’s good to know that this school really wanted to give me a shot, give me an opportunity to play at the next level.”

During a noon ceremony at East St. John High School, six players took turns signing papers and posing for pictures with their parents, siblings and grandparents before a crowd of seniors and freshmen.

“This could be y’all up here in a few years,” Wildcats coach Aldon Foster told the youngsters. “These guys all played ball in the community.”

Wide receiver C.J. Turner was decked out in a bright yellow shirt with a flashy green bow tie as he signed with Southeastern Louisiana University. He said he has spent a few sleepless nights thinking about the moment.

“I just kept thinking, ‘It’s really happening. I’m going to school for free,’” Turner said. “I’m going to get to play a lot my freshman year. My dad just told me, ‘Work hard all the time and you’ll be able to make things happen for you.’”

Turner also was thrilled to have his parents, Clifford and Raynell Turner, with him.

“I do everything for them,” he said.

Clifford Turner said he was proud of his son but, like Walters, he’s glad it’s over.

“It’s been a long journey,” Clifford Turner said. “It’s a hard decision, a lot of headaches, a lot of discussion. He’s been putting in work since he was 8 years old.”

Clifford said he was glad Southeastern won out over other schools.

“Going to Southeastern is like coming full circle,” Clifford said. “I can remember him playing his first junior all-star game there in about 2010. Who would have ever thought, seven years later, we’d be going to college there? We’re real proud of him.”

A handful of other athletes elected to wait to sign, including West St. John’s Austin Alexander, who has some track offers on his table.

St. Charles Catholic coach Frank Monica had no athletes signed Wednesday, adding a few of his players are working out walk-on deals at area colleges.

I can only imagine what it must be like for some high school football players right now. I imagine many are... read more