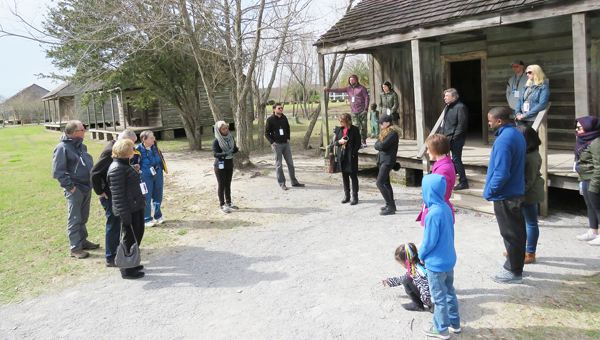 Whitney Plantation tour guide Adina Oubre, fifth from the left, speaks Saturday in front of the slave quarters on the Wallace plantation. The public is invited to take part in a ‘A Celebration of Black History’ this month at Whitney. (Stephen Hemelt/L’OBSERVATEUR)

WALLACE — Courtni Becnel is from Edgard and has family from Wallace. For her, the history at Whitney Plantation is her own.

“I am from this community,” she said. “I have relatives who lived and worked on this plantation until the 1940s and 1950s. We’re pretty sure my ancestors were enslaved on this plantation, as well. For me, it is a connection to the land, to the narrative in general.”

Opened in 2014 as a living history of the slave experience, Whitney Plantation is hosting A Celebration of Black History tied to February’s Black History Month.

“Our goal here is to educate,” Becnel said. “While we are celebrating the culture of the people who were enslaved here, we are celebrating the successes and achievements that we have made. It is very important that everyone of all backgrounds come and take part in this. We want black history to be part of the mainstream curricula, because it’s American history. Until that happens, we have to make sure we don’t forget the stories of the individuals who suffered here.”

The reflection of a tour attendee is seen on The Wall of Honor at Whitney Plantation in Wallace.

Joy Banner, who is from Wallace and serves as director of marketing at Whitney Plantation, said this month’s festivities and attractions are very exciting.

“My family descended from some of the plantations along River Road,” she said. “Education is an important part of our mission. We tell the story of those people that were enslaved. With this community having a lot of those descendants, we felt that it was very important for us to celebrate black history and African American contributions.”

An opening reception, “Black Out Injustice” is planned from 5 to 8 p.m. Friday with a $15 admission.

“A lot of the information we discuss is heavy for most people,” Becnel said. “We do want to get them here to introduce what we talk about, and maybe they can see this tour is something that is not trying to make anyone feel guilty or victimized. It’s really about education.”

The event will be hosted at the Visitors Center, and Linda Phlavazs Wright will perform.

A silent auction is planned, and plenty of River Road recipes will be shared.

Inspired by Edgard’s multi-cultural festival, booths will line the Plantation showcasing many community members’ talents, from crafts to food to children’s entertainment.

Songs and dance at Antioch Baptist Church on site are planned.

Yvonne’s Directions In Dance will be performing, with dancers presenting a 20-minute “Boldness & Beauty” showcase choreographed by Ashlynn Bailey and Yvonne Thomas.

A Tuesday Kids Celebration is planned from 9:30 a.m. to 1:30 p.m. through reservation only. A tour for children is planned.

“It will be a shortened tour just to get the information out there,” Becnel said. “We have some artists from New Orleans who are going to come and teach them about African American art, different concepts, what different pieces mean and give children a chance to actually practice some of the techniques.”

Dancing Grounds, an African-American dance group from New Orleans, is going to host a workshop on traditional dance moves and meanings.

A genealogy workshop is planned Feb. 18.

Genealogist Judy Riffel is going to show participants how to take oral histories, names from family, names heard in stories and use that to actually find people and documents to show a relationship to those individuals.

“This is particularly interesting to African Americans, because it is very difficult to trace your lineage because so many of those names changed,” Becnel said. “A lot of records were not kept very well, so a lot of times people are unable to go very far back. It’s a big thing now for people to know where they are coming from and know what their ancestry is.”

On Feb. 21, members of Xavier University will host free Black History Lectures from 4 to 6 p.m.

A closing ceremony is planned Feb. 26, which also serves as a formal blessing of the grounds.

“It’s a multi-faith blessing of the grounds,” Becnel said. “We’re inviting Catholic and Baptist area pastors to help us bless Antioch Church because it has not been blessed since it was moved. In this area, we are very spiritual, so this is very important to us.”

A traditional African blessing of the grounds is also planned.

Those interested is learning more can call 225-265-3300 or email cbecnel@whitneyplantation.com.

ATLANTA — Tyson Jackson knows just about everybody in the River Parishes is a Saints fan. He gets it. He... read more