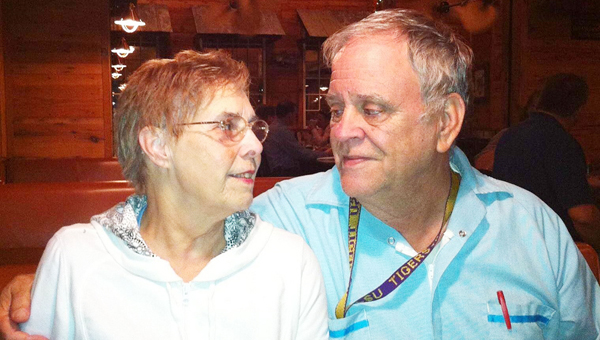 Mary Ann and John Frederic began what turned out to be a LaPlace-based 45-year-old alarm security company in 1972 when John was asked to install an alarm at a local school cafeteria.

John Frederic installed his first alarm system in 1972 when he was asked to secure a school cafeteria that had been getting robbed.

Soon he was installing systems in local businesses and in the owner’s residences. It was the beginning of Sensalert Security Services, a St. John the Baptist Parish business that continues 45 years later.

John’s wife, Mary Ann, came up with the name for the company that was first run out of their garage.

“The name is what we do,” Mary Ann said. “The alarm senses if something’s wrong and alerts the central station, which then follows up.”

When the business outgrew their garage, the Frederics bought the old parish jail on Cardinal Street in LaPlace and ran the office out of jail cells. They were there for 20 years. They painted the walls cream and the bars navy.

“The door of the solitary confinement cell was covered with plywood and an outhouse was drawn on it,” Mary Ann said. “That was the rest room.”

The irony of running a security system from a former jail was not lost on the Frederics. Mary Ann said they had a plaque on the wall that stated the building was rededicated to St. John law enforcement. After 20 years, Sensalert moved to its present location on Mallard Street.

A 1985 L’OBSERVATEUR, above, shows Mary Ann and John Frederic in their Sensalert building converted from a jail.

In addition to helping run the business, Mary Ann taught elementary school for 35 years. A heart attack in 2008 forced her out of the classroom and she became even more involved in Sensalert.

“For the past 20 years, John and I were instructors who trained security technicians nationwide,” Mary Ann said.

She said they were licensed since their first day of operation and all employees passed alarm technician courses prior to Louisiana’s requirement of them in 1987.

Mary Ann relied on the extensive training she received as a teacher to help write a course for other security instructors. The course taught instructors how to recognize various educational needs and modify tests accordingly. She received a national commendation for her efforts. However, Mary Ann is much more comfortable speaking of the customers than herself.

“Our customers are not just a number, they are extended family,” she said. “They have my cell number and can call me anytime.”

It was a sentiment shared by her husband.

“One elderly customer would occasionally set off her alarm on purpose just to talk to the people at central office,” Mary Ann said. “We were notified by central office that the customer was lonely so John would call her and tell her to make a pot of coffee because he was coming over.”

In addition to running a successful business, John and Mary Ann raised a family – Jay, Laura, Chris and Maria.

“We were always encouraged to follow our passions,” Jay said. “We were never told that our dreams were stupid.”

Jay’s passion for music led him to move away and enjoy a successful career in the music industry.

“I owe all my successes to the way I was raised,” Jay said.

Mary Ann and Jay Frederic are seen. The mother and son team are continuing a family business that is more than four decades old.

He was taught a set of values that enabled him to travel the world with the music he loved, then brought him home again after Hurricane Katrina to live out his father’s legacy

“Louisiana will always be home, and when I drove through the area after Katrina, I just wanted to help,” Jay said.

Mary Ann said they were glad to have him. After the hurricane, businesses closed, employees moved away, and those who stayed needed their alarm systems back online.

“We needed someone we could depend on and someone who knew our systems,” said Mary Ann.

Jay said he first went around handing out water and batteries to customers. Later they would call to thank him and remind him they were never charged.

“Our customers ask us if they don’t get a bill,” Jay said. “We operate on a principal that we hope the customers are as honest as we are. And they are.”

This past July, John and Mary Ann were on their way out of the house to go out of town when John suffered a heart attack. In the days following his sudden death, the Frederics received overwhelming support from the community, including other security companies.

“Mom and Dad had built such a strong rapport with others in the association,” Jay said. “Companies were calling to see how they could help.”

Mary Ann said her husband was the master of clichés.

“One of his favorites was ‘People won’t care how much you know until they know how much you care,’” she said.

One customer learned how much Jay cared when she frantically called him from Washington state. There with her family, about to embark on a long-awaited cruise, the lady was informed she needed her birth certificate within three hours.

“She asked me to break into her house so that I could email a copy of the birth certificate to her,” Jay said. “I told her that I would rather get her garage door opener out of her car and go through her garage. She said that her car was in Hahnville.”

After asking the lady to call the neighbors to inform them as to what he’d be doing, Jay drove to Hahnville, retrieved the garage door opener and hurried back to her house to look for the birth certificate. Jay completed the mission that Sunday afternoon with twenty minutes to spare.

Mary Ann and Jay will continue to be there for their customers for many years to come.

“They have come to count on relationships and reliability,” Mary Ann said. “We treat them the way we want to be treated.”