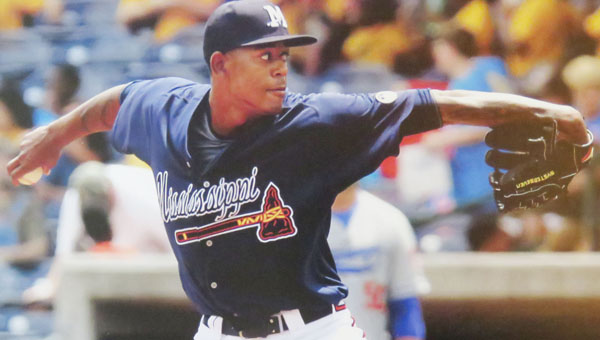 Former East St. John High School pitcher Bryton Trepagnier is shown pitching for the Mississippi Braves, the AA affiliate of the Atlanta Braves Major League baseball team. After a year off for shoulder surgery, Trepagnier has been signed by the Texas Rangers and will depart next month for his seventh year as a professional baseball player. (Photo courtesy of Bryton Trepagnier)

LAPLACE — Every night Bryton Trepagnier has the same dream.

He’s in a major league baseball stadium filled with thousands of cheering fans, and he is on the mound pitching.

It has been six years since the tall, lanky right handed pitcher left his home and family in LaPlace to chase that dream, and he’s not giving up yet.

In just a few weeks, Trepagnier, 26, will report to Arizona for spring training with the Texas Rangers.

The 6-foot-6, 210-pound former East St. John High School standout signed a free agent contract with the Rangers in December, shortly after being invited to a workout.

So far, he has never risen above AA ball despite a lifetime 4.27 earned run average over 263.1 innings with 193 strikeouts. He missed much of the 2016 season with a shoulder injury.

But the dream is still very much alive.

“It’s been a long road,” Trepagnier said. “But it’s crazy because the average high school kid – not saying I ever want to be average – but the average high school kid takes seven years to get to the majors. A college kid takes four years. Baseball is so different from football and basketball because you’re in college. You don’t go straight to the league. It’s just tough. The life of baseball is so hard to explain to someone unless you’re just in it.”

Trepagnier’s dream began when he was just a boy growing up in LaPlace. A multi-sport athlete, he also was a stand-out student.

“I still remember the day he walked into my sixth grade classroom,” said Jason Beber, Trepagnier’s middle school coach. “He was a skinny kid with these long arms that just didn’t seem to fit his body yet. He was always talking sports and asking me for my insight on certain game situations. He was very bright and an honor roll student with manners.”

Beber could see that the youngster was special, though.

“I knew from the first time I saw him throw a ball on my practice field that he was special,” Beber said. “He had a gift and he was eager to develop his skills. Sure, we worked on the fundamentals of the game, but more importantly, we worked on developing his mental skill set. Sure he had talent, but his strength was his intelligence and knowledge of the game. When he was on the hill it was like having a coach on the field. He made the players around him better.”

After his sophomore year of high school, during which he played football and basketball, Trepagnier decided to focus on baseball. He quit the other teams.

“I picked a sport and it was baseball,” he said.

“Naturally, he was dominating on the mound,” Sims said. “He was Mr. Consistency for me.”

While talented, Trepagnier flew under the radar at East St. John. His exposure came when he joined the Atlanta Blue Jays, a travel ball team in Georgia. He spent the summer before his senior year with the team, travelling throughout the southeast.

“That’s where I got a lot of recognition,” he said.

Trepagnier was drafted out of high school by the Pittsburgh Pirates. He reported a few weeks later to the rookie team in Florida, and found himself in a whole new world.

“I can’t even explain it,” Trepagnier said. “It was hot. It wasn’t even like a real stadium. Because it was rookie ball, a lot of high school kids were coming off their high school teams. There were people that were more talented than me, people who threw harder than me. In high school you probably have two or three good players on the team. You get to pro ball, everybody’s good. It took me a while to adjust to that lifestyle and everyone being good and not just the exception for one or two people.”

He does remember his first start.

“I’ll never forget that,” he said. “It was a real stadium. It was huge to me. At East St. John we probably had, like, eight  people come to the game. At State College, there were something like 6,000 people there. It was my first game under the lights. I was so nervous. I was terrible.”

After the 2014 season, Trepagnier got a call from the front office telling him he had been traded to Atlanta.

“I didn’t know what was going on,” he said. “I had never been traded before.”

“I’m a ground ball guy, a sinker/slider guy,” he said. “I get my strike outs, but if it’s the ninth inning and there’s a runner on first and third, I’m the guy to get the ground ball for the out.”

A career in baseball with all its wear and tear caught up with him in 2016. He had to have shoulder surgery and missed the entire season. A “setback” he called it.

Then came the December tryout and signing with the Texas Rangers.

“For me to get that chance again, I was definitely excited,” he said. “I’m encouraged. I’m actually healthier than I ever was. I’m in better shape than I ever was.  Even with my set back, being out that whole year, I’m still on track. I’ve just been working on my consistency.”

Also on the horizon is a November wedding to his fiance, Tiffani Serven, and spending more time with his 6-year-old son, Bryce.

Before he continues to chase his dream, Trepagnier offered some advice to those young men with similar goals.

I didn’t know that. I didn’t work hard in high school, I just went off my talent. I regret it every day now. If I had worked as hard as I could have, I’d have been so much better.”