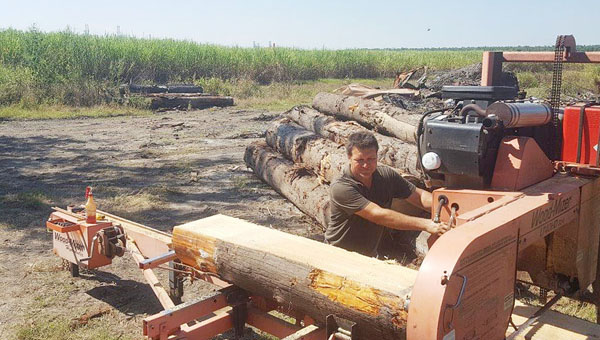 Stephen Guidry puts donated Cypress trees through a portable mill to create the lumber needed for the old Godchaux House renovation in Reserve.

He grew up on the old Terre Haute Plantation in Reserve, which was right next door to the old Godchaux House.

He spent his boyhood searching for relics along the river and behind the old, abandoned plantation house.

When his dad finally sold his family’s plantation in 1972, the 14-year-old Guidry was distraught as he watched years of history being thrown away.

“He was throwing stuff in the dumpster, and I was pulling it out,” Guidry said. “I kept telling him, ‘This stuff needs to be saved.’”

Now Guidry is helping save whatever St. John the Baptist Parish history he can.

He is president of the Godchaux-Reserve House Historical Society and is the one who is overseeing repairs to the more than 200-year- old house and efforts to restore it historically. He also helped restore the old Godchaux train engine, which is now parked on the Globalplex site of the Port of South Louisiana.

Just this week he was named the 2017 Distinguished Graduate of St. Peter Catholic School for his distinguished service.

Obviously, Guidry is a rather observant fellow.

One day he spotted some men who were clearing trees in some swampland — cypress trees, just the type of wood needed for the house.

Cypress trees have naturally built-in oils and preservatives, which make their wood longer lasting and bug and moisture resistant.

They also once were very plentiful in this area. Spotting a few being cut down would be a coup for Guidry.

It never hurts to ask, he said.

“I just went over and asked the guys what they were going to do with the trees,” Guidry said. “Then I asked if I could have them.”

After a couple more requests up the chain of command, Guidry got the answer he wanted — yes — and, shortly thereafter, he had roughly 30 cypress trees.

Of course, trees don’t do a builder much good. They had to be milled into lumber. That wasn’t a problem.

A few weeks later, Guidry and some helpers brought a portable mill out to the worksite and turned the trees into lumber.

Now Guidry has a pile of planks that are being used to repair the house, built in 1764 by settler Jean Baptiste Laubel.

Originally a two-room structure, the house was added to and expanded over the years and eventually became a part of the sugar refinery owned by Leon Godchaux.

Local legend says the town of Reserve got its name when Godchaux called the house his “reserve.”

Guidry said the most fascinating find was that the house came to be owned by black residents, including free people of color Jean Baptiste Fleming and Jeannette Teinter and brothers Francois and Elisee Rillieux.

“This is St. John Parish history,” Guidry said. “This is black history.”

The Godchaux-Reserve House Historical Society has been working since 1997 to preserve the house through grants and private funding. It got a big boost in December when David Fennelly, chairman of Associated Terminals, committed $100,000 to the project.

Guidry said he is currently wooing other donors, and Tulane University’s Master of Preservation Studies program has signed on to help restore the house as accurately as possible.

Despite all the recent good fortune, Guidry says he still could use some more cypress lumber.

RESERVE — The community is invited to join the St. John the Baptist Parish Public School District and the New... read more