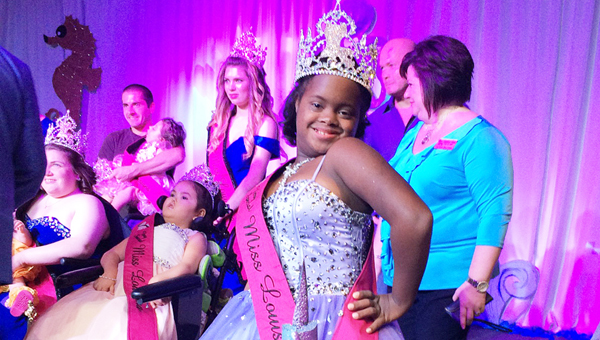 Trinity Jacobs, 13, poses with her crown and sash Saturday after capturing a title at the Very Special Miss Louisiana Pageant in Hammond.

HAMMOND — Trinity Jacobs may not be the most vocal girl, but the LaPlace 13-year-old sure does know how to make an entrance.

With the help of almost two dozen family members and supporters from the River Parishes, she took the stage Saturday in Hammond for the Very Special Miss Louisiana Pageant with plenty of fanfare.

“I can tell you (Trinity) brought an entourage with her,” Pageant Director Robin Abrams said. “They were her cheering squad with signs made. (Trinity) was glowing with smiles the whole time on stage. She modeled. There was fast music playing, and she just got up there and did her own thing. The judges just loved her.”

Trinity, a seventh grade LaPlace Elementary School student, ended the pageant with awards in her age group for overall winner, prettiest hair and most photogenic.

Now in its third year, the Very Special Miss Louisiana Pageant is open to females with various developmental disabilities from across the state. Age categories range from newborns to 40 years old.

Trinity, who was born with Down syndrome, also seemed to be born for this pageant, mother Jennifer Frizzell said.

According to Frizzell, her daughter is not very verbal but that doesn’t stop her from being social.

“She does not know a stranger,” Frizzell said. “She loves to express herself. She has a moderate delay with her speech, so most people can’t understand Trinity, but she makes sure her intentions are known through her actions with others and through her love and smile.”

Abrams said the pageant functions much like the Special Olympics, with the same qualifications for participation.

“Mostly with this pageant, we’re celebrating their life and their abilities, not disabilities,” Abrams said of the contestants. “We want them to have the same experience that any other little girl would have in a beauty pageant.”

That experience was especially special for Trinity, who enjoyed a celebratory meal Saturday evening at Cracker Barrel before sleeping most of the way home due to exhaustion, Frizzell said.

“By the following morning, we got up and went to church,” Frizzell said. “They asked her to wear her sash and her crown and called her up in the front of the church. I got to say a little bit on behalf of Trinity and the pageant.”

Frizzell said Trinity’s platform over the next year as a Very Special Miss Louisiana Queen centers on increasing awareness for these special young ladies and stressing the importance of creating chances for them to shine and feel special like other girls.

Service projects within the community are also planned.

“We’re going to bake cookies at home and bring them to the Sheriff’s Office and fire department to thank them for their service,” Frizzell said.

“We really want to use this opportunity to show how little girls who have special needs can still dream and still shine and how important it is that we support these young ladies.”