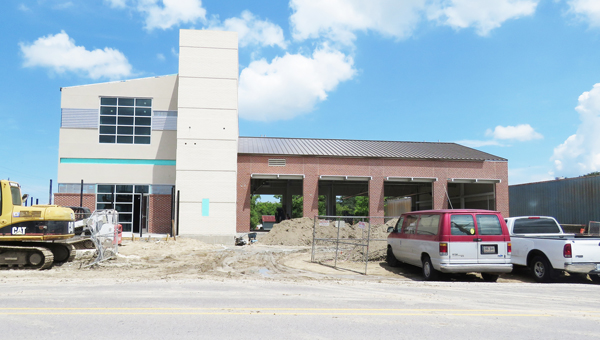 The recently completed $2.9 million Fire Station #51 on Hemlock Street in LaPlace is shown during construction in the summer of 2016.

Parish Council members took no action on a finance committee item that would have executed a change order on the project with Aegis Construction.

Parish President Natalie Robottom asked the Council Tuesday not to delay action because she felt that would create two problems, instead of helping solve one.

“The building is not in question, it’s the property,” she said at the meeting. “There is a lack of information regarding that property and the donation, and it is all related to fire protection.

“This fire station is finished. We are ready to get a substantial completion, get it housed and start serving the people of this parish.”

Based on legal advice, Councilwoman Jaclyn Hotard said it made sense to clear up property ownership.

“The District Attorney’s Office has advised us we need to straighten up some of those issues because we built a fire station on property we don’t own,” Hotard told L’OBSERVATEUR this week. “From what I gathered from the Parish President, the ownership of the property is (from) the individual (volunteer fire department) when they all started their incorporation, so it is a matter of doing all of the proper title work because it has to be transferred to them.

“On paper, it is just not all cleared up. The District Attorney’s Office said that needs to be cleared up before we want to accept a substantial completion for a building that we feel is on property we didn’t own.”

An outside legal firm has been hired to sort through the ownership questions, and that effort has been delayed because of some illness with law firm personnel.

“It is going to get straightened out,” Hotard said. “Obviously, the fire station was already there before with the same problem. At some point something wasn’t done properly.”

Robottom told L’OBSERVATEUR that members of the LaPlace volunteer fire department met with the District Attorney’s Office in March, alleging the Hemlock Street property belongs to the volunteers and questioned the Parish’s ability to build a building.

Robottom questioned that move, adding construction had already begun and volunteer members had previously participated in the design and ground breaking.

“Everything we did, we did in conjunction with the fire chief of LaPlace,” Robottom said Friday morning. “They helped with the architect, they helped design the building. They had meetings with their membership, as well as with us and the paid folks to design a facility that met everybody’s needs.

Robottom said those who are complaining most don’t show up to fire calls.

Attempts to reach a representative of the LaPlace volunteer fire department Friday were unsuccessful.

L’OBSERVATEUR will have continued coverage in Wednesday’s edition.

Councilman Snyder in as parish’s board chairman