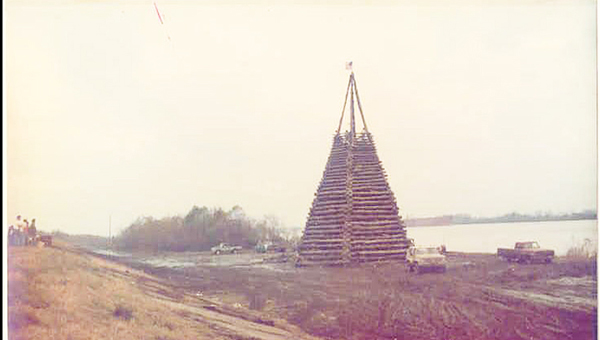 This bonfire built on the batture in Reserve in 1979 was 67 feet high. (Photo courtesy of Wilbert Robert)

Our Stories, Our History: Bonfires — Fiery tradition goes back generations

Whether they were first built to guide the faithful to midnight Mass, light the way for Papa Noel or provide an explosive holiday celebration, bonfires in St. John the Baptist Parish are a tradition that has remained intact since the 1880s.

While today’s bonfires bear little resemblance to the short, teepee-shaped structures first built atop the levee lining the Mississippi River, the custom of a community coming together to build bonfires, then set them ablaze on Christmas Eve, remains.

Wilfred Robert remembers the bonfires he has participated in building.

“I was in the sixth grade at St. Peter School when I built my first bonfire,” Robert said.

Robert was involved in building several bonfires in Reserve in the years that followed, including the 67-foot one built in 1979 on the batture behind the levee.

“The only reason it wasn’t taller,” Robert said, “was because we couldn’t find a taller tree.”

According to Robert, it took approximately ten weekends for a group of 60 people to complete the bonfire.

One ambitious St. John the Baptist Parish project, located this season near South Church Street in Garyville, was a bonfire in the shape of a crawfish, complete with moveable claws. ‘We’ve designed the claws to move by pulling a lever,’ Josh Weidert said. (Photo courtesy of Josh Weidert)

That same year, across the river in Edgard, Denaud G. Roudeze IV was part of a group who built a bonfire in the shape of a ship.

“Someone in Wallace had built a log cabin bonfire,” Roudeze said, “so I said, ‘Let’s build a ship.’” Roudeze said his brother, their cousins and friends worked to complete the structure.

“We were all around 15 and 16 years old,” Roudeze said. “We built the whole thing and never even hurt ourselves.”

Josh Weidert is another St. John native who grew up building bonfires.

“I learned from my dad,” said Weidert, who lives in Garyville. “Some of the bonfires he built were in the shape of a cabin, a pirate ship and a lighthouse.”

Weidert was 15 years old when he and his friends began building traditional bonfires, but for the past nine years Weidert and a group of 12 other men have constructed custom ones.

“We agree on the project,” Weidert said, “then I come up with the basic design.”

This year’s project, located near South Church Street in Garyville, was a bonfire in the shape of a crawfish, complete with moveable claws.

“We’ve designed the claws to move by pulling a lever,” Weidert said. “We loved having parents bring their kids so that we could show them how it worked.”

Weidert said that his group loves building the bonfires and has tremendous response and support from the community.

“It puts everyone in the holiday spirit when they see the bonfires coming up,” Weidert said.

As spectacular as this year’s bonfire was, Weidert fondly recalls his favorite design — a pink ribbon. That bonfire was built in 2014 in memory of Deanna Caillouet, the mother of Darren Caillouet Jr., a member of the bonfire crew.

In addition to building the breast cancer awareness bonfire, for a donation of $2 each, the team made awareness ribbons from plywood, painted them with the name of someone impacted by the disease and staked each to the levee. The money raised was donated to Perry’s Posse, a local organization that assists cancer victims in the River Parishes.

“It felt good to use the platform we’ve been given to give back to the community,” Weidert said.

While the breast cancer awareness project gave back to the community financially that year, this year, as in every year past, the bonfires give our community and countless others who travel here to view them, a warm welcome.

“Wait for the focus!” I hear that phrase every single time one of my daughters asks me to take a... read more