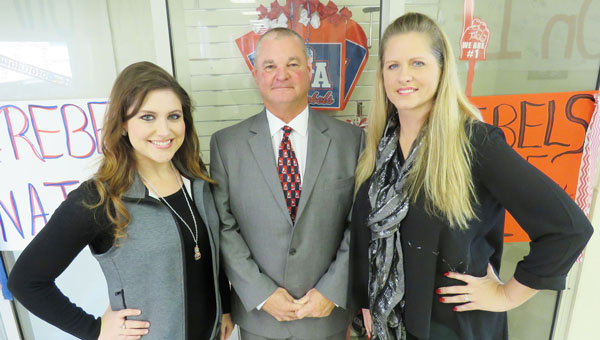 RESERVE — After more than 30 years as an educator, Mike Coburn was happily working as a supervisor in a local plant.

The former teacher, football coach, principal and superintendent was enjoying the regular hours and the time with his wife and grandbabies. Then he got a call out of the blue.

Riverside Academy principal Dr. Perry DiCarlo had announced his retirement, citing a wish to spend more time with his own family. The school needed a replacement.

“I told them yes but I wanted to take a little time and talk to my wife a little bit,” Coburn said. “Then I came back and said, ‘You know, the passion is still there. The fire is still there.’”

“Everything just came together,” Coburn said. “I’m just so excited. I’m back in education again.”

There are other changes as well.

Both are familiar faces. Mazella has been teaching English at Riverside for 10 years. Gomez has taught English Language Arts, Writing and ACT prep courses for three years.

Coburn also is a familiar face (and name) to many in the River Parishes — as he is finding out. Throughout his two weeks of transition with DiCarlo, Coburn has had many students ask him, “Do you know my mom? Did you coach my dad?”

Oftentimes the answer is, “yes.”

Coburn, who is from Franklin Parish in north Louisiana, was a graduate assistant football coach at the University of Louisiana-Monroe (then Northeast Louisiana University) when his mentor, Lou St. Amant, told him it was time for him to go.

St. Amant helped get the young Coburn a job at Holy Cross High School in New Orleans, where he was an assistant football and head wrestling coach from 1977-1980.

In 1980, East St. John High School, under the direction of head coach Phil Greco and senior quarterback Timmy Byrd, won the state championship with a perfect 14-0 record. After the season, Greco, another ULM grad, lured Coburn to Reserve, then he left for a job back in Monroe.

Coburn stayed, however, and in 1984 he was promoted to head coach and athletic director. In 1987 he became the school’s principal, serving until 1993.

In 1993, Coburn left the school system to become the Chief Administrative Officer for St. John the Baptist Parish, but he returned in 1996 to become principal at Garyville-Mt. Airy Math and Science Magnet School.

All that experience served him well when, in 2001, he was named Superintendent of St. John Parish Schools. He later would serve as the director of school and community programs at the State Department of Education for four years before returning for a brief stint as the Chief Administrative Officer for the Parish.

Then he went to work in a plant.

DiCarlo said Coburn’s many years of experience should serve him well in the job he vacated after six and a half years. DiCarlo’s son, Christian, has opened a restaurant in Luling.

“I think they have an experienced person who can come in and carry on the traditions of the school,” DiCarlo said. “I thought the students were wonderful. I think the teachers and faculty were great. I wanted to be a more of a personal principal. I wanted to care about each child and care abut each teacher, not only teaching but also their personal lives. I feel I know I left knowing 100 percent  of those students and their parents and what their ACT score was.”

This is Coburn’s first foray into the world of private schools and he said he welcomes the challenge.

“The public education was straight forward,” he said. “You have to follow the rules of the BESE board, the department of education. We follow all those things, but here you can pick and choose who gets to come to your school and who doesn’t. You’re running your own school.”

With that in mind, Coburn said his goal is to change the mindset at the school and the perception of the public that it is all about sports.

“My goal really is to increase enrollment, increase the academics, change some of the beliefs of the students and the way they think and bring back Riverside pride,” he said. “If you want to be a part of Riverside, you’re someone special in our books and you’re going to be treated that way. We all know football is king here. We want academics to be king.”

LAPLACE — One plea bargain has been reached and a trial set following the 2015 Memorial Day shooting of an... read more