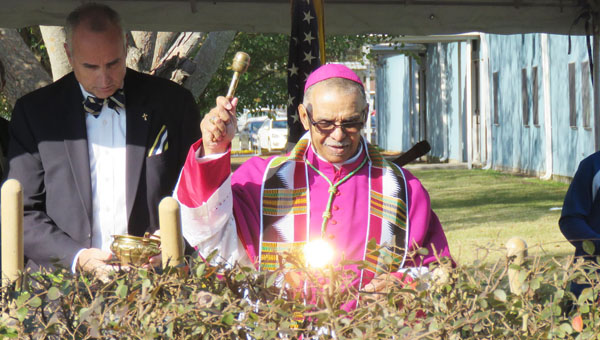 LAPLACE — With prayers and blessings St. Charles Catholic High School leaders, students, alumni and supporters officially broke ground Tuesday on a $5.7 million renovation project they hope will being new life, new students as well as a new color to the 38-year-old institution.

Having secured the approval of Archbishop Gregory Aymond and the Archdiocese of New Orleans, work is expected to begin over the Christmas holidays on the project, which will create a new school exterior look and new spaces on the interior for the school’s 480 students.

Louis Authement, who serves as the school’s advisory board president and co-chaired the fundraising for the project, speaks at Tuesday’s ceremony.

Improvements will include updated security features, a $30,000 technology upgrade, a new large conference room, an expanded cafeteria and commons area, renovations to the gymnasium, the conversion of the current chapel into a computer lab, repairs to the parking lot and the construction of a brand new stand-alone chapel.

The renovations are expected to be complete in 2018.

The familiar blue corrugated metal façade will be replaced with brick, stucco and glass and a new front entrance.

“It will take all of 2017,” said Louis Authement, who serves as the school’s advisory board president and co-chaired the fundraising for the project. “The day will come when we all look back on this day and say, ‘Wow.’ The reality is, right now we’re in a boatload of debt. We will pay back every penny, even if we have to knock on doors with a bucket.”

The project is being funded through a loan from the Archdiocese of New Orleans, along with a United in Faith capital campaign, the first in the school’s history.

The fundraising campaign, led by co-chairs Authement and Bubby Guidry, has secured more than $1.45 million in gifts and pledges from nearly 500 families, individuals, businesses and foundations since going public in March of 2014.

It received a huge boost from Class of 1955 alumnus Jake Giardina, who offered a $100,000 challenge grant.

“We are groundbreaking today because we were willing to try,” Authement said.

“It’s as simple as that. To take that all-important step of simply trying, we started with long odds and short options. Now we’re on the threshold of millions of dollars of improvements that are going to outlive all of us.”

The original St. Charles School began in 1929 in Destrehan. The high school was founded in 1948 under the Sisters of the Immaculate Conception. The Archdiocese decided to break the high school away from St. Charles Borromeo in 1977 and opened the current building on Sept. 18, 1978.

Among the most noticeable changes will be to the school’s exterior.

The familiar blue corrugated metal façade will be replaced with brick, stucco and glass and a new front entrance.

“We’re excited,” said Courtney Millet, the director of instruction and institutional advancement at St. Charles and a 1984 graduate of the school.

“We are so thankful for all the people who came out here today because, well you just never know. To have that much support means a whole lot.”

For a closer look at the details of the project, visit sccunitedinfaith.steiergroup.net.

LAPLACE — When Olivia Reeves’ mom, Natalie, pulled her daughter aside to have a chat one day, little Olivia wasn’t... read more