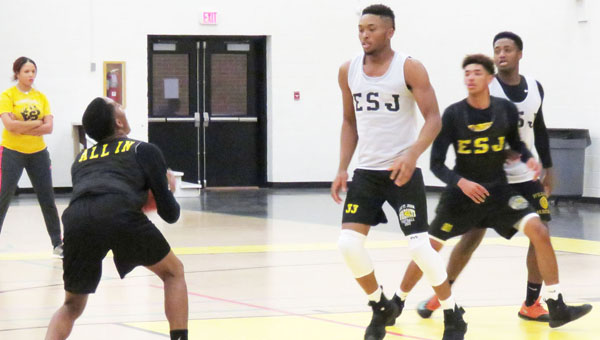 RESERVE — For some coaches, losing eight seniors off a district championship basketball team would mean a lowering of expectations and a back-to-the-drawing board rebuilding year.

Yes, his team did win the District 7-5A championship last year with a record of 19-10, 11-1. Then he watched as eight seniors graduated, including district MVP Troy Green.

That doesn’t mean this year is going to be anything less than stellar, however.

“This season is going to be good,” Jasmine said. “Our experiences in the past have prepped us for this moment. We have a program. Even though the guys are younger, they’re experienced. They’ve been playing freshman and JV.”

Then there is Brandon Davis, this year’s starting point guard who will be leading the offense. He is a sophomore, but he’s been playing with the freshman and junior varsity teams while waiting his turn.

“Even though the speed of the game is different, he still got an opportunity to work in the system,” Jasmine said. “It just took him a while to work up to game speed.”

Davis said he is ready to take on the leadership role.

“It’s all about preparing in practice for different game type situations and different obstacles that come our way,” he said. “In practice we’ve got to get ready, so I have to learn to adapt as a sophomore point guard. We lost a lot of seniors so we’re younger but we have a lot of maturity.”

Davis also had to adapt to several weeks of playing without the one returning starter, forward Antonio. As a sophomore, Antonio was an All-St. John the Baptist Parish selection, averaging 10.7 points, 10.2 rebounds and 2.7 blocks per game. He will be relied on heavily this season if the Wildcats are to make another run.

The 6-foot-4 junior also was the starting tight end on the football team, which made the playoffs this year.

Davis said that just put a little more pressure on him.

“I just had to step my role up and what I was doing on the court,” Davis said. “I had to get aggressive on defense since we didn’t really have the big man since he was playing football. I had to get my other teammates to fill those shoes.”

While his basketball teammates were inside the gym, Antonio was still on the football field. In November, he was still recovering from dislocating his kneecap during a game.

“It hurt for, like, 30 seconds until they popped it back in,” Antonio said.

Jasmine said he didn’t mind waiting for the football players.

“I’m an East St. John guy,” he said. “When you have guys playing football you can’t complain about that.”

The Wildcats lost their playoff game on Nov. 4. Antonio played basketball the next week.
“It was great to be back on the team,” he said. “At first, I felt I wasn’t ready yet and Coach was telling me I was going to play. It felt pretty much the same, physically as catching the ball and tackling, but it was a lot of running. I had to get back in shape.”

Antonio said he’s all caught up now and ready to lead the team — with Davis’ help.

“It’s really a rebuilding process,” he said. “We’re a lot younger than we were last year. We had a court full of seniors. This year we have a court full of sophomores, juniors and freshmen, really. It’s going to be a great season because everybody has to hustle.”

Antonio said playing with Green last season was not only fun but also a learning experience.

“I used to guard him in practice,” he said. “That made me better.”

As the team approaches the Christmas break and the start of district play on Jan. 3 against H.L. Bourgeois, it is 6-7.

Last year when it started district, East St. John was 8-7.

“Technically, when we compare last year and this year, we’re right on schedule,” Jasmine said. “December has historically been our month to switch gears a little bit. I like to tell the kids, some teams are peaking in December and we’re getting better.”

Now, he says, they have to do more. Winning district is good and all, but it’s not enough.

“We have to change our mindset,” Jasmine said. “The mindset we’ve had, the formula we’ve used has got us district titles and not state titles. Our goal is always going to be the best team in the state. It takes some reconditioning. We’ve consistently won district, but I have to look at myself and say, ‘Yussef, what have you been doing that got you this far?’ And I’ have to tweak some things.

LAPLACE — When Trenese Smith was inducted into the Loyola University Athletics Hall of Fame in January, no one was... read more