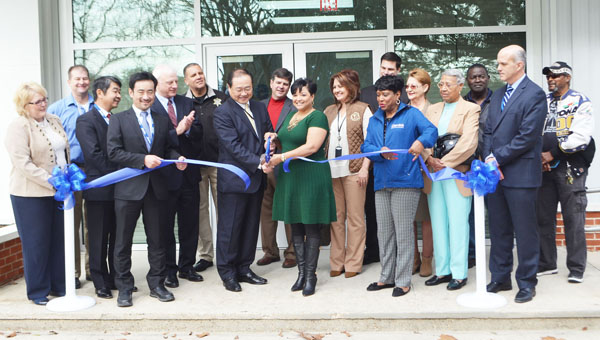 LAPLACE — The mood was festive with plenty of promises for a lasting relationship built on mutual support and communication as company and parish leaders celebrated the corporate office grand opening of Denka Performance Elastomer in LaPlace.

St. John the Baptist Parish President Natalie Robottom said local leaders are pleased with Denka’s commitment to the community, demonstrated through the acquisition and upgrades to the facility.

“We are here for you,” Robottom said. “We understand that many of our residents and neighbors live very close and probably have more contact with you than some of us. Safety is very important to us, and you have demonstrated to us that it is very important to you, as a company.”

Robottom said challenges lie ahead for Denka and St. John, but can be overcome through open communication.

Denka Performance Elastomer is in the process of instituting a multi-million dollar series of technical measures to reduce emissions of chloroprene from its LaPlace facility.

The voluntary measures, company officials say, are designed to reduce emissions of chloroprene by 85 percent.

Denka Performance Elastomer acquired the LaPlace facility from DuPont Nov. 1, 2015. The company is owned by two Japanese companies and was expressly formed to purchase the Neoprene business from DuPont, which had operated the Neoprene units since 1973.

Denka Performance Elastomer employs 250 people and provides support for more than 20 contractors, which can double in number during certain times of the year, according to company leaders.

In an effort to employ as many local residents as possible, Lavastida said Denka Performance Elastomer has partnered with South Central Louisiana Technical College in Reserve and is recruiting from local students.

— Candace Hemelt contributed to this report.