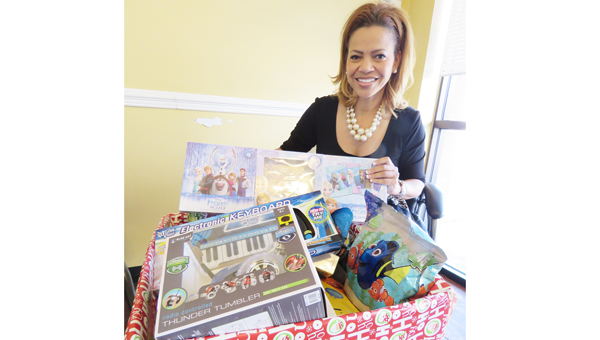 Eliza Eugene of Blessed to be a Blessing shows off some of the toys that have been donated for a St. John Parish Christmas giveaway next week.

LAPLACE — Growing up with a single mother, Eliza Eugene remembers how hard Christmas could be for her family.

“My mom would tell us, ‘There might not be much this year,’” Eugene said. “She had to work real hard. Somehow, something always came through. The community, the church, a neighbor, someone would step in and there would be a toy.”

Now that she is a successful adult, Eugene wants to be that somebody for others.

Cylie Lorio holds on tight to the toy she received at the 2015 event.

Together with the St. John Parish Parent Teacher Organization, District Attorney’s office, Sheriff’s Office and Assessor’s Office, along with Marathon, Cargill and Valero, Eugene’s team will hand out approximately 1,000 toys to community children.

“Last year we had 356 families come out,” Eugene said. “We distributed nearly 1,000 toys to the kids. We just have the kids come in and listen to Christmas carols and every child gets to go home with a toy.”

This year’s event will take place from 6 to 8 p.m. Monday at the St. John the Baptist Parish Community Center. Several choirs and bands from the area perform carols. There is no registration required.

Over the years Eugene’s organization has handed out toys to the children of inmates at the parish jail and children in the foster care system. At one time she even hosted a sit-down dinner for local families in need.

“We would invite the whole family to come in,” she said. “It was very emotional at times.”

This year alone Blessed to be a Blessing has hosted a school backpack giveaway with school supplies and a turkey dinner giveaway for Thanksgiving. She also organizes a bicycle giveaway.

There are times when Eugene will even deliver toys to the homes of those who are unable to attend the annual giveaway.

Eugene’s philanthropic endeavors stemmed from her own childhood when her mother used to walk to the former Weber’s Supermarket (now Gregg’s) in Reserve, where she worked as a janitor.

It began in her own office in LaPlace, where she and assistant LaToya Stewart, set up a room with toys and invited local children to come.

“We would not allow the parents to come in with them,” Eugene said. “The parents had to stay up front, and the kids were just so, so, so happy. These were families we targeted, that we knew were in need. That was the biggest blessing, when you have parents with tears in their eyes because they didn’t know how they were going to do this for their child. We were able to step in that way.”

It was while watching a holiday movie on TV that Eugene first came up with idea.

“I saw a movie about the healing of the city and when they thought they couldn’t have their Christmas event, but how that event really helped the city cope with some of the things they were dealing with,” she said. “My heart said, ‘That’s what we need here in St. John.’ We just opened it up to the entire community. It was about giving the toys to the kids, but it was about the community and how can we bring every aspect of government together to say, ‘We all care.’”

The event really began to take off after Hurricane Isaac devastated the area.

“It’s a tremendous event,” Dinvaut said. “We always support it.”

Anyone wishing to donate a present may drop off a new, unwrapped toy at Eugene’s office, 2015 W. Airline Highway in LaPlace. There are drop off boxes located at the St. John School Board Office, 118 W. 10th St. in Reserve and at every school in the district. 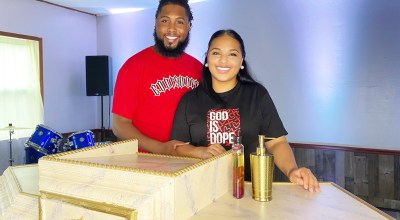