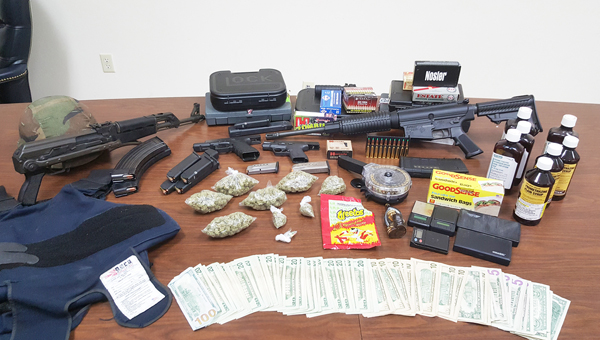 ‘Ready for a war’: Guns, drugs seized from Reserve home

RESERVE — There were enough weapons and guns found during a recent drug raid that led St. John Sheriff Mike Tregre to say it appeared two Reserve suspects were “ready for a war.”

The arrests culminated more than a week of investigation that included “hours and hours” of surveillance following a tip from the community, Tregre said.

“(The amount of guns) is above average,” Tregre said. “It was like they were getting ready for a war. They were as heavily armed as the law enforcement officers.”

The suspects told authorities they were trying to make extra money to feed their family.

“We’ve had a number of drug deals that go real bad and turn lethal in St. John Parish,” Tregre said. “They’re trying to feed their family, but at the same time they are putting their family at risk.”

Throughout the surveillance, authorities witnessed numerous individuals, not necessarily tied to the guns and drugs, at a location where they were not supposed to be spending time.

“We’re working with probation and parole, and those individuals are going to be spending Christmas with us,” Tregre said.

Morris Lagrande was booked with four counts of illegal carrying of a weapon with controlled dangerous substance, illegal possession of stolen firearm, sale of legend drug without prescription, possession of Schedule 1 CDS, possession with intent to distribute marijuana and possession or distribution of drug paraphernalia.

LAPLACE — Voters approved a request from St. John the Baptist Parish Government to rededicate more than $400,000 in yearly... read more