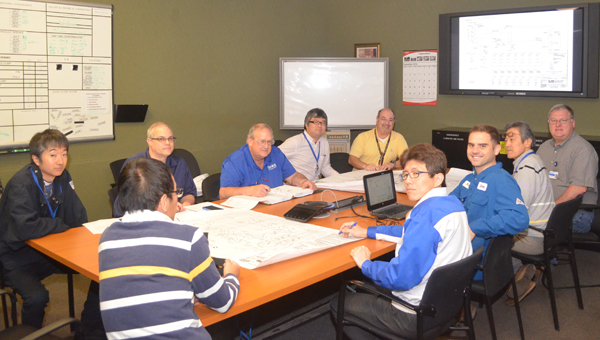 LAPLACE — Accusations of fear mongering and information withholding continue to pepper St. John the Baptist Parish conversations regarding LaPlace chloroprene emissions that may be tied to potential cancer risks.

Louisiana Department of Environmental Quality Secretary Dr. Chuck Brown was emphatic in recent public statements that St. John residents are not in any imminent danger and those who suggest otherwise are misunderstanding the facts or outright lying.

“We have not seen any higher incidents of illness in St. John than anywhere else in the state of Louisiana,” Brown told attendees at last week’s St. John School Board meeting at Emily C. Watkins Elementary School. “As a matter of fact, for some categories it is even less. There are no imminent threats that you have to take any action to address.”

At the center of the controversy is the Denka facility in LaPlace that produces a synthetic rubber known by the trade name Neoprene. Denka acquired the business in 2015 from Dupont.

Brown said more than a half dozen mobile air labs have been established across the East and West Banks of the parish, monitoring emissions 24 hours a day.

The results are available for public review at epa.gov/la/denka-air-monitoring-summary-sheet-2.

Much of the fear expressed by local residents concerns readings from those monitors that have logged chloroprene air components at well above .2 micrograms per cubic meter; however, Brown stressed that benchmark is not a fair judgment point.

“Regarding the .2 number, if you could all forget that, you would be better off because there is no standard,” Brown told School Board members. “Nobody can stand here and tell you (a standard). If they tell you that, it is inaccurate.

“When we start to measure what’s coming out of the back end of that oxidizer, then that is going to tell us what other steps we need to take and what number we need to establish in order to be protected. I want to guarantee you that I am monitoring, watching and have your best interest at heart.”

Three weeks ago Denka Performance Elastomer announced a series of measures to reduce chloroprene emissions from the LaPlace facility.

Plant Manager Jorge Lavastida stressed Denka has always been in compliance with existing air permits, adding this effort is to “voluntarily install a series of measures designed to reduce emissions of chloroprene by 85 percent” and is being worked in unison with EPA and DEQ consultation.

The reduction efforts include installing a modification at the Neoprene Unit to route emissions to an additional vent condenser, installing a vacuum pump and brine condenser on the Chloroprene Refining Column, adding more than 1,000 feet of pipe to route process vents for removal by combustion and installing an oxidizer to remove much of the remaining chloroprene emissions.

Parish and state government leaders endorsed the announcement in November.

“I want everybody to hear from us,” Brown said. “The last thing I want to see is somebody fear mongering. That rubs me the wrong way. You have to have the right information.”

John Cummings, owner of Whitney Plantation in Wallace, sarcastically told School Board members he was the fear monger before sharing a document he said showed plenty of chloroprene readings above .2 micrograms per cubic meter in St. John — many tens of times and hundreds of times above that threshold.

“This is not a matter of school children coming in for six hours a day and parents picking them up and they go to their home in LaPlace,” he said. “This is an invisible cloud that we are breathing in right now.”

He requested School Board members entertain a meeting with Louisiana Environmental Action Network members to hear about their concerns with chloroprene emissions.

Robert Taylor told attendees he lives within 1,800 feet of the Denka facility and is no fear monger, just a concerned resident who has been denied access to emissions information in the past.

“We are not enemies of the parish, but it seems we are being demonized simply because we are concerned,” he said. “Whatever they decide — EPA, NATA, all these guys — we are the ones being exposed to this. I think we do have a right to have that information and to make the effort to see the information. We’re trying to protect our children.

“Working together is the goal we are achieving and that hasn’t (always) been the case. There has been some push back. Industry tried to stop us from getting the information. I don’t understand that. What really concerns me is that they attempted to deny us access to the information. We just want to know what is going on.”

Brown said he had no knowledge of information being denied to community members.