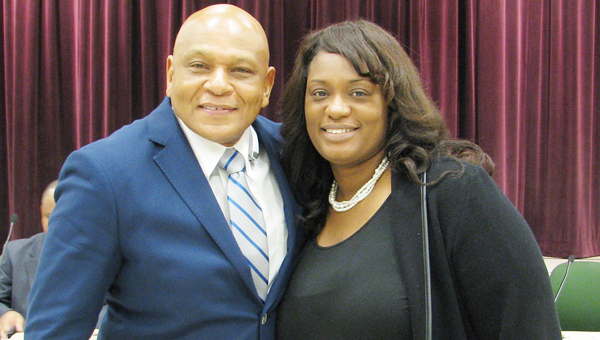 LAPLACE — Rodney B. Nicholas, noted by his colleagues on the St. John the Baptist School Board for his strong will and outspoken approach, was largely thankful in remarks Thursday night concerning his impending departure from the School Board.

The District 10 representative is leaving the Board at the end of 2016 to work as chief deputy of the St. John the Baptist Parish Assessor’s Office.

“I thank God and St. John the Baptist Parish, especially District 10, for the opportunity to serve as your elected School Board representative for the past six years,” Nicholas said. “I only made one campaign promise six years ago when I ran for this office: That I would leave the district better than I found it.”

Nicholas referenced the School District’s “B” rating and a testament to its standing while thanking each Board member by name, as well as numerous School District staffers and supporters.

He also took time to enthusiastically endorse Nia Mitchell as his replacement.

“Ms. Nia Mitchell has my recommendation to this Board to replace me,” he said. “After careful thought and much consideration, I think Nia is the perfect fit. I will be leaving District 10 in very capable and competent hands.”

Following Nicholas’ remarks, attending Board members at Thursday’s meeting voted, with Nicholas abstaining, to approve Mitchell’s replacement on the Board.

Mitchell’s background as a former student and employee of St. John the Baptist Parish Public Schools, as well as her administration experience, were championed this week.

“I’m excited to be part of this Board that is not only striving to lead the parish but lead the state in excellence, because it doesn’t stop here,” she said. “The world will know about St. John the Baptist Parish and (with) my seat on the Board, I will make sure I take part in that. This is definitely an opportunity for me. I am excited to serve and represent District 10.”

The School Board previously set the election to permanently replace Nicholas for March 25.

Candidates looking to qualify for the March election can due so between Jan. 11 and Jan. 13.

Giving Back: Toys for Tots delivers