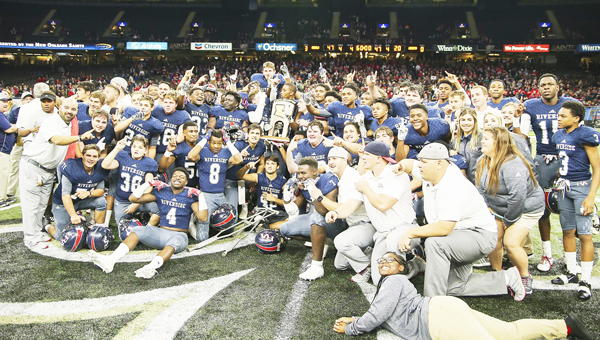 And there’s really not that much that separates them otherwise.

Both are small private schools in St. John the Baptist Parish.

Both are fine institutions of learning.

They also have two of the best football teams in the state.

That was evident in the fact both reached the final game of the 2016 season, the Division III championship game played Friday afternoon in the Mercedes-Benz Superdome, Riverside as the No. 1 seed and St. Charles as the No. 3 seed.

When it was over, both teams left the Dome with a trophy. Riverside’s was gold; St. Charles Catholic’s was silver.

It was the first championship trophy for the Rebels, who previously departed with four of the silver ones.

To get it, they had to beat St. Charles Catholic, a team that also has three silver trophies and one gold from 2011.

A host of Comets players work to bring Kash Foley, No. 1, to the ground.

Both teams also have a fiercely loyal fan base.

That was evident all week as players, young and old, dusted off their old letter jackets and sweaters and posted rather silly looking photos on social media.

It was evident as they teased each other with predictions and boasts. Some, of course, upped the ante, offering certain types of beverages to the winner.

One former Riverside player was working with one former St. Charles player to revive the old wheelbarrow parade that used to follow the LSU-Tulane games of the past.

It was evident Friday morning as a caravan of cars crowded the Interstate highway, headed towards the Superdome.

It was evident outside as all those people, who somehow got a day off from school and work, set up their tailgating tents and sent clouds of barbeque smoke into the crisp air.

But remember when I said there wasn’t much that separates the two?
That was evident in the hugs, handshakes and back slaps I saw exchanged between the folks dressed in red and blue and those dressed in blue and gold and in the shared food and drink.

Sure, once they got inside the cavernous Dome everyone went their separate ways.

The blue and gold Comets fans went to one side; the red and blue Rebels fans went to the other. It was hard to tell which side had more.

Over the next three hours the sides were separate as the score added up on one side and not on the other. Maybe they didn’t like each other so much then.

No matter which side they were on, St. John the Baptist Parish was proud.

Lori Lyons is sports editor at L’OBSERVATEUR. She can be reached at 985-652-9545 or lori.lyons@lobservateur.com.

RESERVE — While most of St. John the Baptist Parish had its attention focused on football this week, the calendar... read more