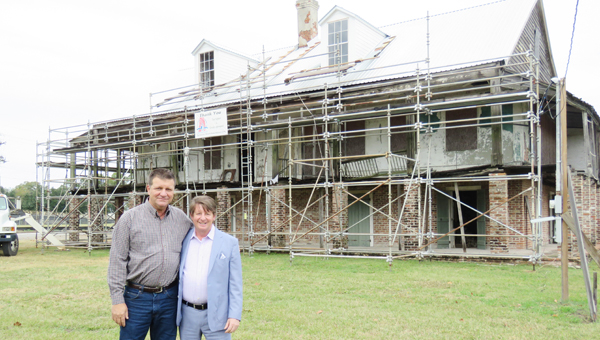 RESERVE — To some, it’s just a crumbling old house, a relic from a bygone era.

To others, it’s an important piece of history that is worth preserving for future generations.

The latter of those folks celebrated a milestone this week — the completion of a shiny new tin roof on the historic Godchaux-Reserve House, the more than 200-year old plantation home at the center of an historic preservation effort by a strong-willed group of St. John the Baptist Parish residents.

The Godchaux-Reserve House Historical Society hopes the home will be fully restored, as depicted in this rendering, and include a museum.

They also got a surprise boost when David Fennelly, chairman of Associated Terminals of Reserve, a strong supporter of the project, announced a commitment of $100,000 to the project.

“Obviously, Reserve is so important to us, as it has been our home, our corporate home, for almost 20 years,” Fennelly said. “Realizing how important sugar and the sugar industry was to this community and its ties to the river and the railroad, which is exactly the business we’re in, we transport cargo and operate port facilities. This is really at the heart of it. And when you understand the history here, it’s probably unparalleled. To be able to be part of preserving all that is very, very important to us.”

Ironically, Wednesday’s ceremony came on a day when a line of heavy showers moved through the area, closing schools. The celebration in Reserve went on as scheduled, however.

“At least we won’t get wet anymore when we’re in the house,” said Steve Guidry, president of the Godchaux-Reserve House Historical Society, which has worked for decades to save and preserve the landmark.

Guidry later led a group of St. John the Baptist Parish leaders on a brief tour of the structure so they could see for themselves how far it has come.

“It was just in terrible shape when we got it,” Keller said. “We’ve come a long, long way from it almost being torn down. People thought it wasn’t worth saving.”

The Godchaux House is a raised Creole cottage located next door to the site of the original Leon Godchaux High School on River Road in Reserve.

It has been moved twice.

The original two-room structure was built by European settler Jean Baptiste Laubel in 1764. Over the years the house was added to and expanded and eventually became a part of the Godchaux sugar refinery, which helped spur the growth of Reserve and Garyville.

Local legend says the town of Reserve got its name when Godchaux called the house his “reserve.”

Of particular interest to local historians is the fact the house came to be owned by black residents, including free people of color Jean Baptiste Fleming and Jeannette Teinter and brothers Francois and Elisee Rillieux.

President-elect William Howard Taft visited the house in 1909 on his way to New Orleans with a contingent of 117 senators and congressmen, 24 governors and three diplomats who were on an inspection trip to determine the possibilities for waterway improvements.

Taft’s Fleet, a flotilla of riverboats on the river, docked in front of the house. Taft then delivered a speech from the front porch.

Another famous visitor was Walt Disney, who came to Reserve in the 1950s to recruit railroad workers for his new project in Anaheim, Cal. — Disneyland and its onsite railroad.

Disney ended up purchasing one of the steam train engines from the Godchaux company, the Fred Gurley, which went into service in at the park in 1958. It is one of five engines still in use today.

Since 1997 the Godchaux-Reserve House Historical Society has worked to preserve the property through grants and private funds.

“It’s been on and off, back and forth over the years,” said St. John Councilwoman Julia Remondet, who showed Wednesday’s visitors T-shirts and tote bags that will be sold to help raise funds.

There is still a long way to go, members said.

Eventually, the society hopes the house will be restored and opened to visitors, along with a museum.

Parish President Natalie Robottom said plans are to incorporate the levee bike path, currently under construction, to allow easier access to visitors. The group also would like to purchase the original Leon Godchaux High School building next door.

“Now we move on to the next phase,” Guidry said. “We’ll get there, if we raise the money. We got a good bit today.”