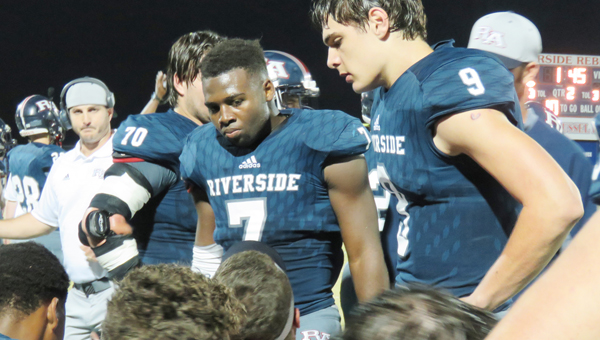 Riverside Academy running back Jeremy Gibson, left, and quarterback Jordan Loving, right, talk to their teammates during Friday night’s semifinal game against Catholic High of New Iberia. The Rebels defeated Catholic 40-14 to reach the Division III championship game for the second year in a row. They will meet rival St. Charles Catholic Friday at 1:30 p.m for the title. (Lori Lyons/L’OBSERVATEUR)

Showdown: Rebels and Comets to meet for DIII title, Rams lose in quarters

RESERVE — There have been some big games played between Riverside Academy and St. Charles Catholic in virtually every sport.

But perhaps none will be bigger than next week’s.

The Rebels and the Comets will play each other for the Division III state championship Friday at 1:30 p.m. in the Mercedes-Benz Superdome.

“We certainly didn’t plan it this way,” Riverside coach Bill Stubbs said. “It just turned out this way. We’ve got to continue doing the things we’ve been doing and not concern ourselves with who we’re playing. We’ve accomplished one task, but we haven’t completed anything yet.”

Riverside Academy, the No. 1 seed in the bracket, did the expected, defeating No. 4 Catholic High of New Iberia 40-14 to reach the finals for the second straight year. The Rebels were the state runners-up last year to Notre Dame of Crowley.

St. Charles Catholic, the No. 3 seed, knocked off No. 2 seed Notre Dame, the defending state champion, 21-10, in Crowley.

That sets up the first ever football state championship game between the two St. John the Baptist Parish rivals. St. Charles won a title in 2011. Riverside has not won one since joining the LHSAA.

Riverside got to Friday’s game with a dominating performance against a solid Catholic team.

The Panthers simply could not match Riverside’s size and speed.

He found Avonti Cannon for a 35-yard score, Cash Foley for a 56-yard score and Jared Butler for an 11-yard touchdown that capped the scoring.

The Rebels were opportunistic. Their first score followed a muffed punt by the Panthers at the Catholic 26-yard line. It took them only two plays to reach the end zone. Gibson ran right for 15, then right again for 11 for the touchdown The PAT kick was no good, leaving Riverside with a 6-0 lead with 6:47 remaining in the first quarter.

The teams exchanged punts throughout the rest of the quarter. The Rebels got the ball with 51 seconds remaining at their own 39. Gibson scored his second touchdown of the night on the second play of the second quarter, running 9-yards. Tanner Louque’s PAT made it 13-0, Riverside with 11:51 remaining in the half.

Catholic finally answered on its next drive, going 65 yards on three plays, including two halfback passes. Brennan Bryant threw a 28-yard pass to Brand Potier to get the Panthers to the Rebels 37. After a short run, Peter LeBlanc threw to Bryant for a 34-yard touchdown.

Riverside came right back, however, going 69 yards on seven plays. On third-and-9 at the Panthers’ 35, Loving found Cannon for a 35-yard touchdown. Louque’s PAT made it 20-7.

Gibson scored his third touchdown with 1:46 remaining in the first half, dodging would-be tacklers on his way for a 21-yard run. He had 100 yards on 13 carries at the half and Riverside had a 27-7 lead.

Catholic got its second touchdown with 1:26 remaining in the third quarter. Quarterback Diallo Landry connected with Bryant on a 64-yard pass that was followed by a roughing-the-passer penalty. On the next play, Landry ran in from the 3.

On the next play, Loving connected with Foley for a 56-yard touchdown to put the Rebels ahead 33-14. With 8:32 remaining in the game.

After forcing the Panthers to turn the ball over on downs with 6:50 remaining, Riverside added its final score — a 10-yard touchdown pass from Loving to Butler.

The No. 3 seed Comets played their usual brand of defense and added some special teams flair to knock off defending state champion Notre Dame in Crowley.

The Comets intercepted the Pioneers five times, returned a fumble for a score, faked a field goal for a score and blocked a punt for a score to get to their first state championship game since 2011.

Quarterback Lloyd Nash had two interceptions for the Comets. He also threw a touchdown pass to Randall Campbell on a faked field goal for the first touchdown of the night.

Delray Oubre scooped a fumble and returned it 36 yards to put the Comets ahead 14-0 just before the end of the first quarter.

Notre Dame came back with a touchdown and a field goal to cut the Comets’ lead to 14-10.

In the third quarter, Jordan Jensen blocked a punt and Trey Joseph returned it 17 yards for the touchdown and a 21-10 lead.

After that, the Comets had to hold on for the win. Notre Dame held them to one first down in the second half.

“We spent a lot of time on special teams and thank God we did because that’s the only advantage we had over them,” Coach Frank Monica said.

“Our offensive line didn’t do anything. We couldn’t even break the huddle right. We just tried to play conservative in the second half when we got the lead with the blocked punt. We had other opportunities we couldn’t capitalize on. How resilient is our football team because the media didn’t give us credit. They wrote us off. And all of a sudden, here we are in the championship game.”

West St. John had a 30-28 lead with 5:46 remaining in the game but Many, the No. 1 seed in the Class 2A bracket, scored two late touchdowns to advance to next week’s semifinal.

Austin Alexander rushed for 102 yards and two touchdowns on 12 carries and Kedric Gray ran for 66 yards and another score. Jamal Walters returned an interception 65 yards for a touchdown.

RESERVE — St. John the Baptist Parish football fans have much to be thankful for this week as three of... read more