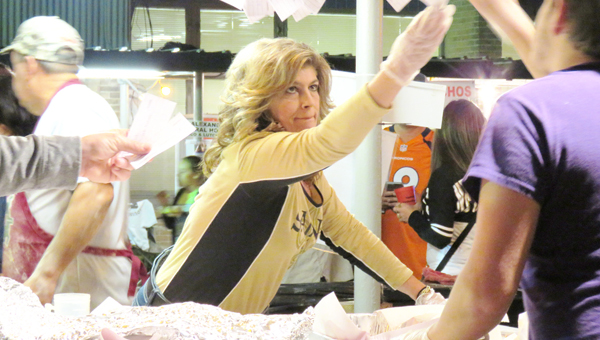 Tammy Esponge puts together seafood poboys while volunteering at the Sacred Heart School fair in Norco this month. (Lori Lyons/L’OBSERVATEUR)

‘I wanted to help people’: Esponge focuses on fundraisers

LAPLACE — When Brittany Chauvin Borne first started putting together a fundraiser for the firefighters who were injured while working a crash on Interstate 10, she knew she needed help.

Just about everyone knew exactly who she needed to call.

Tammy Esponge is a mom who lives in LaPlace and works in Metairie. She likes to volunteer her time at her children’s school and she loves the Saints.

She also knows just how to put together events.

“She was just amazing,” said Borne, whose brother, Spencer Chauvin, was killed while working the August crash. “She knew just what to do and got it all done. I can’t say enough good things about her.”

Esponge is the executive director of the Apartment Association of Greater New Orleans, a non-profit organization that oversees the rental market in the area. Esponge says it also is a big giver to the community, often raising and donating funds for various causes.

That’s how Esponge got to be so good at it, she said.

“I would help put together fundraisers through my work and that taught me a lot of what I needed to know,” she said. “It put me in touch with a lot of people.”

While evacuating for Hurricane Gustav, Esponge’s niece suffered a severe allergy attack and required a lengthy hospital stay in Florida before being airlifted back to New Orleans.

Esponge went into action, putting together a fundraiser that brought in more than $40,000 for the family’s medical expenses in a matter of days.

“I’m not going to go to the hospital and just look at you,” Esponge said. “I don’t like hospitals. I’d rather go out and do something useful.

“I can be more productive doing that than sitting around.”

Since then, Esponge has earned a reputation for her work in the community. In August, she helped organize “Leap for Luke,” an event for the Bourg family, whose unborn baby was diagnosed with Spina Bifida.

“I heard about them through a friend of mine,” Esponge said. “She was going to be out of work and the medical bills were piling up. I just said, ‘Let’s put together a fundraiser for them.’”

In September, it was the huge fundraiser for St. John the Baptist Parish firefighters Mack Beale and Nick Saale, who were injured when a bus careened into a crash site on the Interstate, putting them out of work for an extended period.

Borne said more than one person told her to call Esponge.

“I knew Brittany from a long time ago,” Esponge said.

Esponge was asked to help with the Guns N Hoses fundraiser for the firefighters this month, but was already committed to the Sacred Heart School fair in Norco, where she put up signs, banners and made seafood po-boys in one of the booths. Still, she did what she could for the St. John event.

“I made chili and donated paper products,” Esponge said. “I never say no to anybody, but I made a choice. It’s all about giving back. I started volunteering because I wanted to help people.”