Cargill, Blessing to Be a Blessing hand out turkey feasts for 400 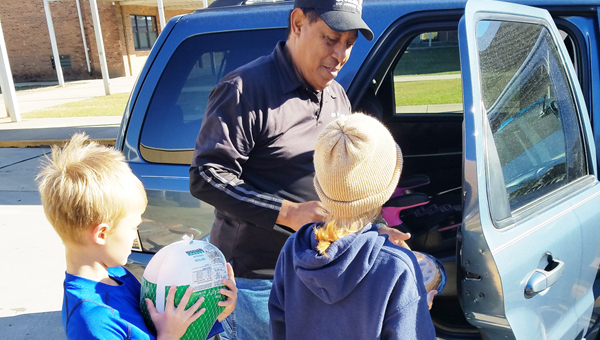 St. John the Baptist Parish Councilman Lennix Madere Jr. is joined by two young helpers Saturday handing out all the fixings needed for a Thanksgiving meal.

RESERVE — East St. John High School is the home of the Wildcats, but Saturday morning it was turkey central.

Recognizing a need to feed the less fortunate members of the St. John the Baptist Parish community during the holiday season, the non-profit group Blessed to Be a Blessing, handed out 400 turkey dinners at the school.

Eliza Eugene, who heads the organization, said families in the community received all the ingredients for a traditional Thanksgiving dinner — turkey, rice, yams, peas and apple pie — with drive-thru service.

“They would pop the trunk on their cars and we would load them up,” Eugene said.

It was the first food giveaway in St. John for Eugene’s organization, which also organizes a back-to-school backpack giveaway and a Christmas toy giveaway.

“We see the need in the community,” Eugene said. “We know that more than 80 percent of the kids in the community receive free or reduced lunches. We see how many turn out at our back-to-school event.”

Eugene said local schools and the District Attorney’s office helped identify the families who received the meals. School administrators were asked to submit the names of families in need. Others were participants in St. John District Attorney Bridget Dinvaut’s Opportunity Now program.

The event was sponsored by Cargill and held in conjunction with St. John Schools, the Sheriff’s Office and the District Attorney’s Office.

St. John Councilman Lennix Madere Jr. was there, handing out turkeys and brown bags of groceries, alongside many Cargill employees and their families.

“I think it was a tremendous success,” he said. “It was a good thing. It allowed some people who may be on a little hard times to put a meal together for Thanksgiving. I think everyone had fun doing it.”

Madere said the receiving families were most appreciative.

“As they drove off, they all said, ‘Happy Thanksgiving,’” Madere said.

“It was very mutually beneficial.”

Eugene said Cargill in Reserve has agreed to sponsor another giveaway next year. She is hoping for more sponsors.

“The more we get, the more we can give,” Eugene said.

The annual toy giveaway will be held Dec. 19 at the St. John Community Center. Anyone wishing to donate a toy may drop one off at Eliza Eugene Enterprises, 2015 W. Airline Highway in LaPlace.

The event was sponsored by Cargill and held in conjunction with St. John Schools, the Sheriff’s Office and the District Attorney’s Office.