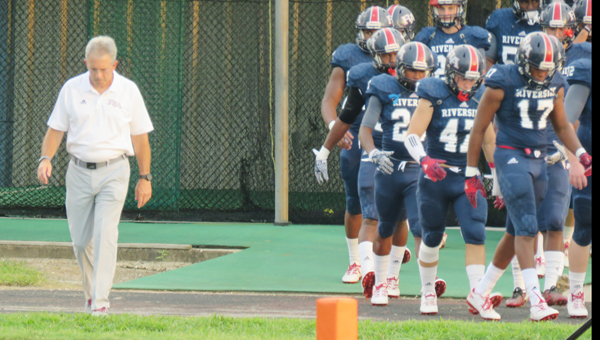 RESERVE — St. John the Baptist Parish football fans have much to be thankful for this week as three of their four football teams are still alive in the playoffs.

Riverside Academy, St. Charles Catholic and West St. John High — three teams from one district — will compete in this week’s third round of the playoffs.

The Rebels, the No. 1 seed in the bracket, will host Catholic High of New Iberia. Riverside was the Division III runner-up last year after losing to Notre Dame of Crowley.

The winners of this week’s games advance to the Mercedes-Benz Superdome to play for the state title.

Remember this: Last year, Riverside and St. Charles had to play each other for the chance to reach the Dome. The Rebels won.

Catholic High of New Iberia, the No. 4 seed, is new to the mix. After finishing as the Division III runners-up in 2014, the Panthers had to forfeit four wins last year and didn’t even make the playoffs.

Two weeks ago, Sacred Heart learned quickly that it was not easy to run on the Rebels so they elected to throw on every down but two.

It remains to be seen if the Panthers will attempt that strategy. They certainly used the running game against Newman.

Junior quarterback Diallo Landry ran for 162 yards and another score.

Riverside (10-1) took a little while to figure out Sacred Heart’s game plan. It happened again Friday at Ouachita Christian as the Eagles managed to score the game’s first 10 points. The first touchdown came on a trick play.

Once they settled down, however, the Rebels rolled again. Running back Jeremy Gibson scored three touchdowns, rushing for 125 yards on 14 carries. Louis Cheneau also scored.

Quarterback Jordan Loving was 15 of 22 for 239 yards and two touchdown passing, plus he ran for a score.

This is the 13th consecutive year the Comets have posted eight wins or more in a season. This is their eighth semifinal appearance.

Notre Dame, which plays in the same district with Sacred Heart and Catholic-N.I.,  held Country Day to 188 yards on 51 plays while rolling up 354 yards on offense, using eight different ball carriers and six different receivers.

Surely they will test the Comets, who let Calvary amass 314 yards but held the Cavaliers scoreless.

Playing as the No. 17 seed last season, West St. John stunned the No. 1 seeded Many Tigers with a 34-30 victory at home in Edgard in the Class 2A regionals.

The No. 17 seeded Rams are hoping history repeats itself this week on the road in the quarterfinals.

West St. John needs two more wins to get to the Class 2A championship game Dec. 9 in the Superdome.

They trailed 15-0 before the first three minutes had elapsed and trailed 21-0 after the first quarter.

They came back though.

Quarterback Austin Alexander rushed for 196 yards and three touchdowns, plus he passed for 114 yards and two scores. Both of those were to Marcus Boudoin.

The Tigers rushed for 356 yards. The defense had four interceptions, two by DB Demario Coleman. He returned one for a touchdown.

Running back A.J. Carter rushed for 170 yards and two touchdowns.

Years ago, in my other incarnation as a sports writer, the powers that be had me do a weekly picks... read more