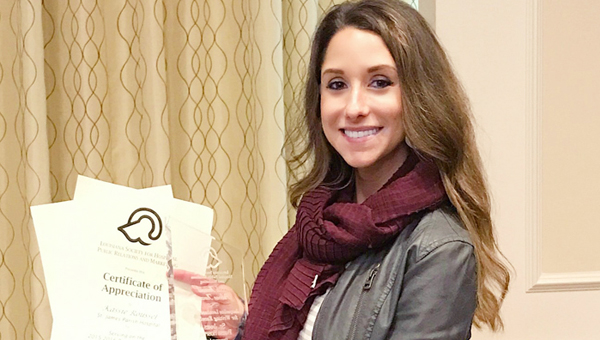 Kassie Roussel, director of marketing, displays the award for the hospital’s 2015 Annual Report.

The Pelican Awards recognize excellence in hospital public relations and marketing with the goal to improve the quality and effectiveness of hospital communications.

Hospitals from across the state compete in different categories for the awards, which are judged based on planning, implementation, results and creativity.

Kassie Roussel, director of marketing, was presented the award for the hospital’s 2015 Annual Report, marking the third time she has been recognized as an overall award recipient for creative writing.

Roussel, who has served on the Board of Directors for the Louisiana Society for Hospital Public Relations and Marketing for two years, was also announced as the 2017 President-Elect of the Board.

Her term will officially begin at next year’s conference.

PAULINA — More than 50 River Parishes women gathered recently for a photograph signifying strength and hope. The women, some... read more