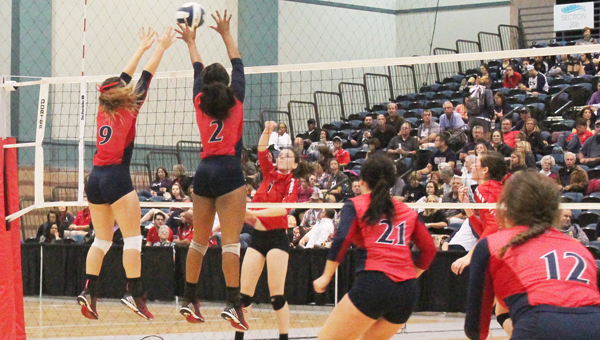 Riverside Academy volleyball players Toni Perrin, No. 9, and Sydney Joseph, No. 2, go up for a block Thursday against Sacred Heart in the Division IV volleyball quarterfinals at the Pontchartrain Center in Kenner. The Rebels lost in four games to the Cardinals. (Lori Lyons/L’OBSERVATEUR)

KENNER — The Riverside Academy volleyball team made some history this season with its record and its No. 3 seeding in the Division IV playoffs.

They were hoping to make a little more.

Sacred Heart used a strong serving game, solid hitting and took advantage of Riverside miscues to take a 3-1 victory Thursday and end the Lady Rebels’ magical season in the quarterfinal round.

Riverside, which hit an historic high as the No. 3 seed in the bracket, finished with an overall record of 39-6. It was the school’s fifth trip to the Pontchartrain Center in Kenner in the last seven years.

The Rebels, who brought bus loads of students and fans with them to the venue, were hoping to reach the semifinals for the first time since 2013. They have never reached the championship match.

Sacred Heart, on the other hand, has won 13 state titles, the last in 2006. They entered this year’s playoffs as the No. 6 seed.

By all accounts, the Cardinals and the Rebels were two evenly matched teams in everything from size to style of play. It was even difficult to tell them apart on the Pontchartrain Center’s center court Thursday, with both wearing long-sleeved red shirts.

“It was a heck of a match,” Rebels coach Margot Frederick said. “We played it to the wire. I thought we played really hard. I was really proud of our effort. We had our backs against the wall, 0-2 (games) and to come back like that and push it to extra points in the fourth set, I found myself literally smiling. I was looking at our fans, thinking, ‘Man, they’re loving this. This is what it’s all about. This is why we do this.’”

Sydney Joseph gave a valiant effort with 22 kills. Briley Becker had 10. Abby Bourgeois had 39 assists. Maggie Duhon had 34 digs and Becker had 22.

The Cardinals jumped to an early lead in all four games, forcing Riverside to play catch-up.

Riverside rallied to tie at 13-13, but Sacred Heart (27-14) was able to pull away thanks to the stellar serving of Ashten Rabalais, who served the Cardinals through 10 straight points. A return error finally broke the streak and gave Riverside a 14th point. Their 15th came on another error.

Mareau tied it at 16 with her own kill, then it was all Sacred Heart. Riverside would score only one more point, on a kill by Kate St. Pierre. Three Rebels errors led to the final three points for Sacred Heart.

The third game was Riverside’s chance to shine. After once again trailing early, the Rebels tied at 8, 9 and 10, then began to pull away with solid hitting from Joseph, Becker and St. Pierre up front.

The fourth game was a thriller. Riverside again let Sacred Heart lead but never pull away. The Cardinals’ biggest lead was 17-11. After that, Riverside chipped away, tying at 22 on a net violation by Sacred Heart, then taking the lead on an ace by Carli Hymel. There would be ties at 23 and 24 and several long rallies before the Cardinals scored on back-to-back return errors.

“We were very prepared for it,” said Duhon, a senior. “I think we all went in clear-headed. As the game went on, I feel like we started to crumble. We’d think, ‘we got this,’ but no one ever stepped up and said, ‘we’re going to win this game.’ When we started fighting back, I said, ‘that’s the team I know. That’s Riverside.’”