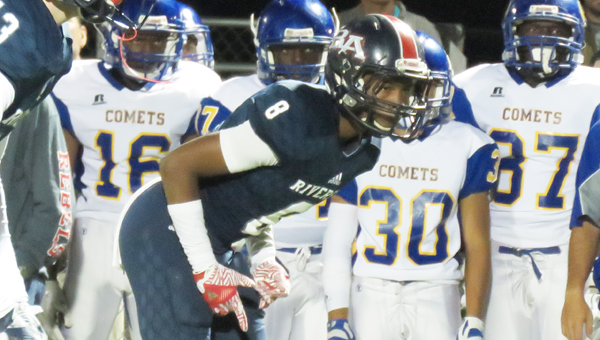 Riverside Academy junior safety Garland Robertson Jr. returns to the playoffs this year after breaking his neck during action in 2015.

RESERVE — As the Riverside Academy football team begins its quest for a return to the Superdome to play for the Division III final, no one is happier than junior safety Garland Robertson Jr.

Robertson didn’t get to play much his freshman year because he was, well, a freshman.

That changed last year when he became a starting sophomore. But after helping the Rebels get to the post-season, Robertson had to miss the playoffs after he broke his neck during the team’s game against Country Day.

“This is really the first time I’ll get to play in the playoffs,” he said. “I hope I can stay healthy and help my team.”

“I’ll never forget it,” said Garland Robertson Sr., who was watching the game from his usual spot on the Riverside Academy track. “I saw the hit and didn’t think anything of it. He stayed on the ground for just a few seconds. When he came to the side, they started looking at his neck. I knew something wasn’t right. I know my son.”

The junior Robertson had severed the C5 vertebrae in his neck. There was no pain, he said. It was more akin to hitting your funny bone. By halftime, however, he couldn’t take his pads off.

A trip to Ochsner Health Center – River Parishes in LaPlace resulted in an initial diagnosis of a strained ligament. A second opinion at Ochsner Medical Center on Jefferson Highway confirmed everyone’s worst fears.

Although he was lucky in that there was no paralysis or loss of feeling, Robertson, who is a star basketball player at Riverside, as well, was told he probably would never play basketball or football again.

“They were almost 100 percent sure he would never play sports again,” Robertson Sr. said. “Then he told me and his mom that he would. He just felt in his heart that he would play again.”

Robertson underwent surgery the following Monday, during which two pins were inserted into his neck. He then spent three months in a neck brace.

In February, Robertson was cleared to play basketball.

Over the summer, he was cleared to play football.

Robertson has played all season, moving from the corner position to safety. He wouldn’t have it any other way.

“It’s what I love to do,” he said. “Imagine someone telling you that you couldn’t do what you love. I had three months to think about what it would be like to never play again.”

Robertson Sr. said people have questioned his decision to allow his son back on the field after such a potentially devastating injury.

“I’m definitely scared,” he said. “I say a prayer before every game. I don’t ever push him. This is what he wants to do. I tell him, ‘You broke your neck. This is not an arm or a leg.’ He says he’s fine and wants to play. I am more comfortable about him playing basketball than football.”

Robertson Jr. said he isn’t scared to play and has not changed his approach to the game.

“If you’re going to play scared, you might as well just hang it up,” he said.

On Oct. 28, almost one year to the day after his injury, Robertson made the trip with his team to Country Day School in Metairie. He said that’s really the only time he thought about it.

“That was the game that it happened,” he said. “That was the same team. I just had to put it out of my mind.”