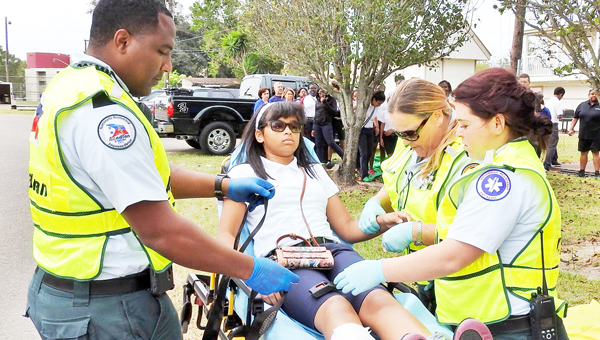 After walking into the lobby Breaux went to the front office demanding to see his son, Nicholas. He told the staff he had an appointment.

They said he didn’t.

“Then it all went south from there,” Breaux said.

Breaux is a Lieutenant in the St. John the Baptist Parish Sheriff’s Office, but his role Monday was an armed father looking for his son at a local school.

He was the “bad guy” in a controlled training exercise conducted by the St. John Parish Public School System, in conjunction with the Sheriff’s Office, Fire Department and other local agencies.

After “shooting” the principal, Breaux roamed the hallways of the school looking for his son as students cowered in fear behind locked doors.

That part was very real, said Jenny Sobalvarro, 13, who spent her day off from school as a terrified student hiding in a classroom while Breaux rattled the door and tried to get information from a student outside.

“We were in class and the principal (announced), ‘Lockdown! Lockdown!’” Sobalvarro said. “We went into a corner and the man started shaking the door. Then he was screaming, ‘Nicholas! Nicholas!’ and asking ‘where is he?’ Then we heard gunshots and all that. It was scary. It was very real. My friend was almost crying.”

Breaux said it was difficult being the “bad” guy.

“It was interesting,” he said. “I’ve done it before. It was kind of scripted, but I was kind of able to do whatever I wanted to do in engaging. I kind of enjoyed that. The screaming my son’s name was fun. Banging on the doors was fun. You try to make it as realistic as possible so they can learn. I’ve been told a couple of times I did it well. I was almost too scary. You have to kind of get into the mindset that they know it’s a drill and you tell yourself that they only can learn from this. That made it easier. You don’t want to scare the kids to death.”

St. John public schools were closed Monday and Tuesday in anticipation of Election Day, offering an opportunity for local officials to prepare for a real emergency. Sheriff’s deputies, firefighters, emergency medical personnel, school officials, government officials and the Red Cross participated, with many giving up a day off to do so. There also were more than two dozen student volunteers, who will receive a certificate for their participation.

“We started planning this in the spring,” said Lt. Chip Wale, who helped coordinate the Sheriff’s Office’s response. “I think 2009 was the last drill like this we did, a full-scale drill.”

“It helps just to coordinate everyone in the event that we have an incident like this,” George said. “It’s good to not let that event be the first time you bring everybody together so that we can work out any kinks we have before this type of incident.”

After the simulation, all agencies gathered in the cafeteria to go over the event and express their concerns.

All agency heads said their personnel responded as trained.

“I feel like our guys did a great job,” Wale said. They responded well, quickly and professionally. We work with fire and EMS on a daily basis on all kinds of calls, so we all work well together. We didn’t see anything major we need to work on, maybe some little tweaks we want to take care of in-house.”

RESERVE — As the Riverside Academy football team begins its quest for a return to the Superdome to play for... read more