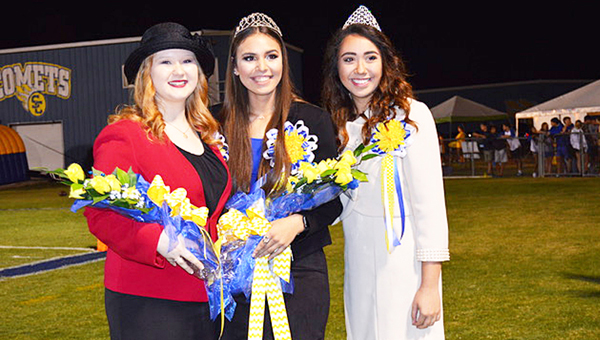 SCC Homecoming Court members were voted on by their peers.

Senior Madisen Roussel, daughter of Terry and Melissa Roussel, was crowned St. Charles Catholic’s 2016 Homecoming Queen. Madisen is a member of the Student Council and has lettered in softball. She has been a member of the Fellowship of Christian Athletes (FCA) for four years, and now serves as an FCA leader at the school.

Madisen is on the Retreat Team and conducts retreats at local elementary schools.

Senior Sadie Kelly, daughter of Patrick Kelly and the late Lori Kelly, was named 2016 Homecoming Maid of Honor. She has been a Student Council member for three years and is serving as President of the senior class.

Sadie is also President of the SCC Stagehands and has performed in the past three spring productions. She is a member of Music Ministry and the Creative Writing Club at SCC.

St. Charles Catholic High School also welcomed Alumni cheerleaders to cheer at the game, and they did an awesome job.