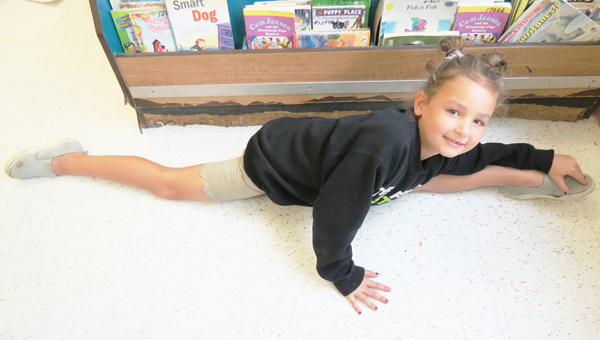 Elyssa Menefee has no problem splitting time between gymnastics and school work.

As 8-year-old Elyssa Menefee watched the Olympics this summer, she was inspired — but she wasn’t always impressed.

Elyssa is a budding little gymnast herself, one with a pretty bright future, it seems.

According to her mom, Sharon, there are a total of five talent levels coaches use to evaluate athletic ability. Elyssa already is at Level 4.

“She is a Level 5 in talent, but they’ve kept her at this level because of her age,” Sharon said. “She can’t be competing against the 15- and 16-year-old girls.”

She probably could be.

Elyssa can do the jumps, flips and splits any other competitor can, even at the Olympic level. So, as she watched the competition on her TV, she often found herself saying, “I can do that.”

“She really can,” Sharon added.

Sharon Menefee and her daughter Elyssa travel to Baton Rouge several times a week to take instruction and compete with Louisiana Cheer Force.

She also often tumbles her way through stores, the hallways, school and the playground.

“She’s always tumbling at recess,” said Tina Brouwer, Elyssa’s teacher and Sharon’s co-worker at John L. Ory Magnet. “She’s a phenomenal student with a bubbly personality. She’s a helper in class, a leader and she is just so talented. It’s amazing the things she can do.”

Elyssa was just like any other cute little girl whose mother put her in a dancing class as soon as she was potty trained.

Elyssa Menefee, 8, displays her scrap book, where she likes to draw and keep photos of family members.

It didn’t take long, however, before her instructors noticed something was different about her.

“They came to me,” Sharon said. “They said she just had this natural ability and we should look into putting her into gymnastics.”

Soon, little Elyssa was going to Baton Rouge several times a week to take instruction and compete with Louisiana Cheer Force, which travels throughout the country competing in national and even world cheerleading competitions.

Because she is so tiny, Elyssa is often the “flyer” — the top of the pyramid or the one who gets thrown through the air.

“It’s fun,” she said, adding she was only really scared the first time someone threw her around like that.

Elyssa is so good, she also has a private coach, Wade Smith, of Louisiana Spirit in Harahan.

That means lots of driving from their LaPlace home to either Baton Rouge or Harahan, plus a lot of travelling from state to state for competitions.

That’s because Elyssa hopes to, one day, compete in the Olympics herself.

Sharon said she and her husband, Blaine, have no idea where this talent came from.

“My mom asks me that all the time,” she said.