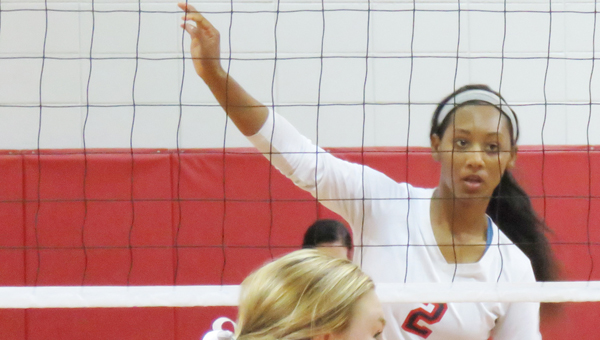 Riverside Academy volleyball player Sydney Joseph, No. 2, had 24 kills in Thursday’s regional match against John Curtis. The Lady Rebels won the match 4-1 to advance to the quarterfinals. (Lori Lyons/L’OBSERVATEUR)

RESERVE — A lot of people tried to tell the Riverside Academy volleyball team how hard it is to beat a team three times in a season.

The Lady Rebels just wanted to show how it can be done.

Riverside defeated their District 6-IV foe John Curtis in four games Thursday afternoon, securing the team its second consecutive trip to the State Tournament at the Pontchartrain Center in Kenner.

Riverside (33-4), the No. 3 seed in the Division IV bracket, will play No. 6 seed Sacred Heart in a quarterfinal match Thursday. Game time has not yet been set.

The Lady Rebels will be looking to reach Friday’s semifinals for only the fourth time in school history. The team has never reached the finals.

Should they do so this year, that match will be played at 11:30 Nov. 12. in the Pontchartrain Center.

Prior to Thursday’s match, Riverside coach Margot Frederick said she wasn’t nervous at all. She had seen her team play against Curtis twice and win. She had watched the videos. She was confident.

So were her players.

“All of us were really confident,” Briley Becker said. “We knew we would get the job done.”

Riverside had to overcome an uncharacteristic slow start filled with errors, which helped Curtis jump to a 15-8 lead.

Once the Rebels found their rhythm, however, they stormed back to take the first game 25-20.

They fell behind early in the second game as well, and Curtis capitalized, winning 25-22.

The third game was all Riverside, as the Rebels pounded their way to a 25-7 win. They had to come back for the fourth and deciding game, as well.

“I was especially proud of the way we won the third game,” Frederick said.

Joseph said she and her teammates had to tune out the doubters.

“A lot of people were saying how hard it is to beat a team three times,” Joseph said. “I was, like, I’m not worried about that. We got this.”