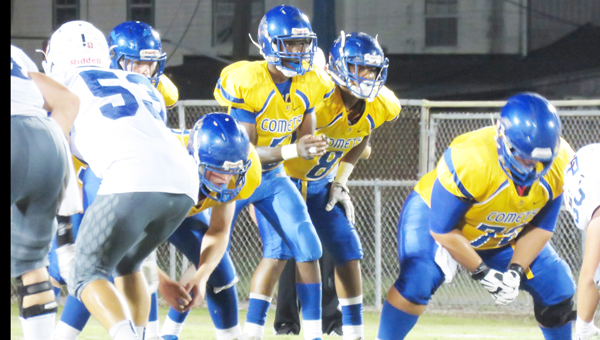 St. Charles Catholic quarterback Lloyd Nash, No. 5, and running back Narquez Jones, No. 8, are set for the snap during Friday night’s District 12-2A game between the Comets and Country Day. Jones rushed for 157 yards and two toucdowns in the Comets’ 33-0 win. (Lori Lyons/L’OBSERVATEUR)

LAPLACE — The St. Charles Catholic football team started the season with a lot of question marks.

It finished with an exclamation point.

The Comets closed out the 2016 regular season with a resounding 33-0 victory over Country Day.

It was the Comets’ second shutout in a row and its fourth of the season.

That says something about a defense, which held the Cajuns to 53 yards of offense, most of that coming on its first drive and its last drive in the first half.

Except for those, during which Country Day managed to get a total of five first downs, the Cajuns were held to four plays on three drives.

They had one 5-play drive in the second half. That left the Cajuns’ defense frustrated, weary and unable to stop the Comets’ clock-chewing drives.

All of the Comets’ touchdowns came on short-yardage rushes by Nash, (3 yards), Jones (two for 2 yards) and Tim Williams (1 yard).

Andrew Rodrigue added a pair of field goals, one for 37 yards and another for 25.

After Country Day’s fruitless first drive, St. Charles started its first scoring campaign at its own 17-yard line with 7:51 on the clock.

After 17 plays, 83 yards and the rest of the quarter, Nash ran in from the 3 on the second play of the second quarter.

The Comets elected to go for 2 with their version of the “swinging gate” play but failed, leaving them with a 6-0 lead.

Country Day’s next drive lasted only four plays and gained 7 yards, giving St. Charles the ball at their own 40 after the punt.

The Comets took only eight plays to score this time, with Jones running in from the 2. Rodrique’s PAT put St. Charles ahead 13-0 with 6:00 remaining in the half.

Country Day’s next drive was another 4 plays, with the Cajuns failing on a fake punt on fourth down.

St. Charles took over on the Cajuns’ 23-yard line with 4:55 on the clock. This time the Comets couldn’t capitalize and Rodrigue came in for a 37-yard field goal.

Country Day looked to finally get going on its next drive, moving from its own 20 deep into Comets’ territory.

But on fourth-and-1 at the Comets 21, Jack White was stopped short and the Cajuns turned the ball over on downs with 35 seconds remaining. St. Charles would take a 16-0 lead into halftime.

St. Charles padded its lead with an eight-play, 48-yard drive to open the second half, capped by Jones’ second 2-yard touchdown of the night.

The Rebels, who already clinched the District 12-2A title undefeated, celebrated homecoming Friday night with a solid victory to finish the regular season 8-1.

It was Riverside’s eighth straight win after losing the season-opener to John Ehret.

Cordez Joseph returned an interception for a touchdown and Garland Robertson  ran a punt back for a touchdown before Rebels coach Bill Stubbs cleared the bench in the second half.

Jamal Walters had five catches for 122 yards and one touchdown. Marcus Boudoin also scored a touchdown.

The Rams still will make the playoffs in Class 2A.

The Wildcats needed a win to secure their spot in the Class 5A bracket.

They probably locked up their spot with a big win on the road at Central Lafourche.

Wide receiver C.J. Turner scored four touchdowns for the Wildcats, who finished the regular season on a 3-game win streak.

Turner scored touchdowns of 70, 13 and 60 yards from Dasmain Crosby, and he had a 90-yard kickoff return for a touchdown.

Javon Antonio scored on a 60-yard pass from Crosby, who also ran for a 23-yard score.

Chris Thompason had a 60-yard interception return for a touchdown. East St. John finishes with a 5-5 regular season record and finishes 3-3 in District 7-5A play.