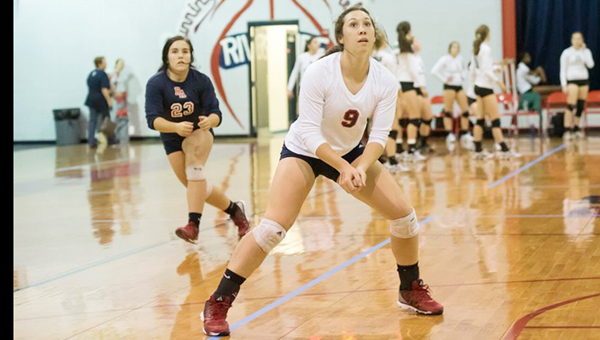 RESERVE — The Riverside Academy volleyball team showed up for school Monday  looking battered and bloody in their matching Halloween costumes.

It was no reflection on their season.

The Lady Rebels have cruised through the 2016 season, finishing with an overall record of 38-5, the District 6-IV championship, the No. 3 seed in the Division IV playoff bracket and a first round bye.

That is not to say that the ladies didn’t have to fight to achieve those things in a season of unsurpassed greatness. They certainly did.

Now everything just gets tougher.

The winner of Thursday’s match will advance to the annual State Tournament to be held at the Pontchartrain Center in Kenner, Nov. 10-12.

St. Charles Catholic earned the No. 17 seed in the bracket and defeated Thomas Jefferson, 3-1, Tuesday night. That puts the Lady Comets in a match at No. 1 seed Pope John Paul II at 5 p.m. Thursday.

Despite several trips to the tournament and three trips to the semifinals, the Rebels have never gotten to championship Saturday.

Thursday’s match will be no walk through, Frederick said, even if it’s Curtis — a team the Rebels have played and defeated twice this season. The first match went to five games; the second went to four.

“I went back and watched the video of the last time we played them,” Frederick said. “I honestly think if we play to our capability, we should beat them. We just have never played our best, neither time we have seen them. If we play as well as we played this past weekend (in the Episcopal tournament), we should take care of them.”

The Rebels have not faced Lee High this season.

St. Charles has no easy road either.

The team has had an up-and-down season, said coach Meg Ericksen, with several new players who had to learn how to play around one another.

“It was expected with all the new teammates,” she said. “I was extremely proud of how quickly the girls learned to play together, as well as step up in any position when and where they were needed.”

The Comets faced another hurdle as they headed into the postseason without Ericksen, who gave birth to a son, Benjamin, last Thursday.

Instead, the team was led by Tricia Lowry, who last coached a Comets volleyball team eight or nine years ago.

“That was before rally scoring and before the libero,” Lowry said. “I’ve had to think quick on my feet.”