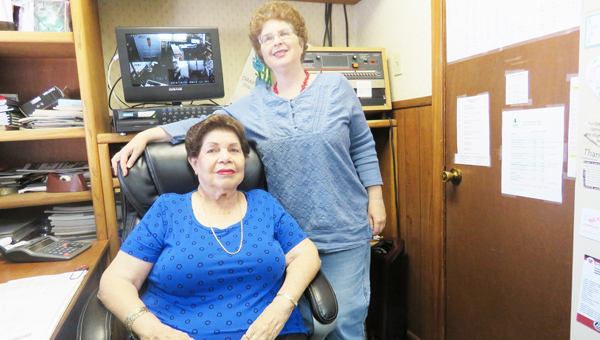 Joan Ancker, sitting, has been serving generations of greater LaPlace children for the past 50 years at Joan’s Day Care and Preschool. With her is her daughter, Diane Ancker Broussard, who also works at the day care.

LAPLACE — Joan Ancker was just a young mother back in 1967 selling Avon products around her neighborhood.

She and her husband, Robert, had moved from Honduras, first to Kenner, then to LaPlace. Some of the other moms in her neighborhood were on the go.

A neighbor decided she wanted to go to work at the local post office and asked Ancker if she would watch her child.

“That was my first job,” Ancker said.

“They would want to go shopping at TG&Y for fabric and things to sew,” Ancker said. “I didn’t want to do those things.”

So Ancker offered to watch her friends’ and neighbors’ children.

She started with one and then went to four. Soon (after someone told her she needed to be licensed), she became the first licensed day care in LaPlace.

Now, 50 years later, Ancker is celebrating half a century as a business owner and a surrogate mom to generations of children who have learned, played and napped at Joan’s Day Care and Preschool on Carrollwood Drive in LaPlace.

At first, Ancker took children into her home and even enlarged the garage to make room for more.

That made for some interesting afternoons for Ancker’s daughter, Diane Ancker Broussard, and son, Robert Jr.

“I just remember coming home from school and having to wade through the sea of kids to get to my room,” Broussard said.

Eventually, Ancker purchased the Carrollwood property — after some soul-searching.

“I went to Haifa, Israel, and prayed,” said Ancker, who practices the Baha’I Faith. “I prayed that I would come back and, if everything worked out, I would open the day care.”

Upon her return, Ancker got word that her loan had been approved — after two other banks turned her down.

“Everything was happening good,” she said. “Then I started building it and, by the time I finished it, it was full.”

Ancker’s first students paid $12.50 per week to attend the day care and learning center, which is private and receives no state funding. Now more than 100 children regularly attend the LaPlace mainstay, either before school, after school or all day long.

She has had two generations of children come through her care and even one third generation child.

Along the way she has held hands, wiped noses, dried tears and even offered sage advice.

“All the parents tell me they love me,” she said.

These days Ancker works side by side with her daughter, who traveled the world and taught English in China before returning home to help her mom.

Although she will be 79 years old in just a few weeks, Ancker said she will keep going as long as she can.

“I tried to sell it, but they want me to practically give it away,” she said.

“I would like to retire, but I don’t know what I would do. I think I’d be bored.”