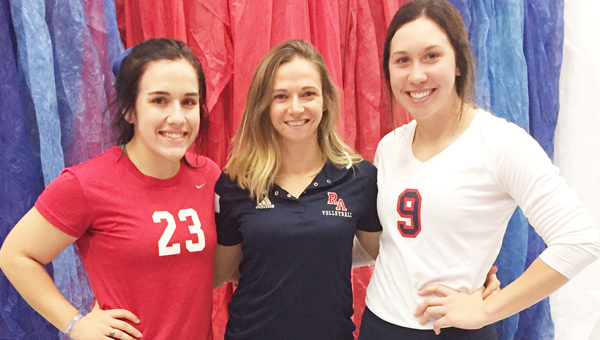 RESERVE — Riverside Academy volleyball coach Margot Frederick had a feeling this season would be a special one.

Back in August, Frederick had her Lady Rebels go through a few intense camps — one at Louisiana Tech another at the University of New Orleans. Both were positive experiences.

Then Frederick built a schedule she thought would give her team some early wins to help build their confidence.

It all worked perfectly.

The Lady Rebels clinched the District 6-IV championship Monday with a three-game sweep of their cross-town rival St. Charles Catholic.  They then sealed an undefeated district championship with a sweep of Haynes Academy Tuesday.

Sydney Joseph led the Lady Rebels with 16 kills against the Comets. She also had 11 digs. Briley Becker had 12 kills, Maddie Duhon had 14 digs, Toni Perrin had 10 kills, Carli Hymel had four aces and Abby Bourgeois had 37 assists.

Haynes Academy put up a fierce fight in the first game against Riverside, taking the Rebels to a 31-29 score. Riverside came back to take the next two 25-16, 25-11.

Joseph had 13 kills and Becker had 10 in that match.

That puts Riverside at 32-4 overall and at the No. 3 spot in the Division IV power ratings.

This comes as no real surprise to Frederick, despite the fact her roster has only two seniors — Duhon and Perrin.

“In all honesty, I knew that we would have the opportunity to be sitting right where we are — a Top Four team,” Frederick said. “I love this team. They trust each other and our staff. It doesn’t even feel like the season is winding down. It’s been a joy to coach them.”

Now Frederick has to get her team ready for the postseason. The volleyball pairings will be announced Sunday, with the first round of the Division IV playoffs beginning Wednesday.

The goal, of course, is to get to the Pontchartrain Center in Kenner for the State Tournament, which runs Nov. 10-12.

Riverside has been to the semifinals three times (the last time in 2013), but has never made it to a championship game.

Frederick is hoping to change that.

“Our focus is on getting our kids to be more mentally prepared for each match,” she said. “They aren’t fully aware of the historically good programs in our state, so we are still doing a lot of learning. Our seniors certainly don’t want it to end and have been excellent leaders down this last stretch.”

Despite its up-and-down season, St. Charles Catholic looks to make the Division IV bracket in the middle of the pack. As of this week, the Lady Comets were holding at No. 17 in the power rankings.

The team will be without its coach, however, as Meg Ericksen is due to give birth any minute.

“This season had its ups and downs,” Ericksen said. “I was extremely proud of how quickly the girls learned to play together, as well as step up in any position when and where they were needed.  Heading into playoffs I have full confidence in our abilities to make it one game at a time.  (I) fully trust the coaches that are stepping up to take my place.”

The 2016 season was especially difficult for the East St. John High Lady Wildcats, who lost their head coach, Chelsey Lucas-Nicholas, shortly before the season began, then did not win a game.

“(We) took a big loss when we lost Coach Chelsey,” said Jarranisha Allen. “We started the season off with high energy and high hopes. Towards the middle, we somewhat lost that mentality. We began to lose sight of what was more important, which was being a team and sticking together.”

Allen is unsure if she will return ext fall.