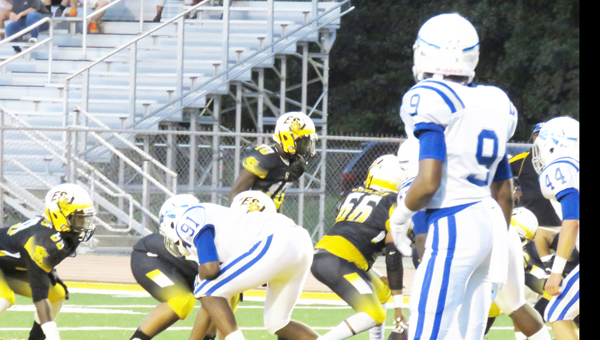 For the third week in a row, his Wildcats had come out of the gate strong, rolling up a nice, comfortable lead.

For the third week in a row, however, their opponent was coming back late. In consecutive weeks, Destrehan and Hahnville had come back to win in Reserve after the Wildcats led 13-0.

On Friday, the Wildcats were on the road at Terrebonne and led 40-14 after three quarters.

Then the Tigers scored three touchdowns in the fourth quarter, and Foster was holding his breath.

Terrebonne scored with 11 second remaining in the third quarter then recovered an onside kick. After another score, the Tigers recovered the onside kick again.

East St. John got the ball back deep in their own territory, took a safety and executed a quick kick to the Tigers. With no timeouts, however, Terrebonne fell short and the Wildcats managed to hold on to take a 40-37 victory.

With the win, East St. John improves to 3-5, 2-3, giving Foster one more win than he got last year in his first year as coach of the Wildcats.

“It’s a huge win,” Foster said. “It’s big for our kids, it’s big for our program. We’ve been showing flashes of brilliance all year, we’ve just been waiting to play all four quarters. The kids were happy to get the win, but they still were frustrated because, at the end of the day, they had to hang on to win.”

The Wildcats will take a break from the District 7-5A juggernaut this week with a home game against Franklin High School (1-7) for Senior Night.

It’s still a must-win situation for the Wildcats, however.

East St. John moved up four spots in the Class 5A power ratings to No. 30 with two games remaining. The Wildcats will close out the regular season next week at Central Lafourche.

They must finish in the top 32 to earn a spot in the playoffs. East St. John missed the playoffs last season for the first time since 2001.

“We are in playoff mode over here,” Foster said. “We’re not out of it.”

How big is this game in the District 12-2A race?

The Cajuns are renting lights.

Originally projected to be a 3:30 p.m. game at Country Day, which has no lights on its field, the game has since been moved to 7 p.m.

Old Metairie may not be prepared for the onslaught of River Parishes fans who likely will be headed to this game, which should determine the district champion.

The Rebels held St. Charles to 38 yards in the first half of last week’s game and to under 100 yards in the game.

The Cajuns, although unranked, are 8-0 and coming off a 52-21 dismantling of Newman Saturday. Country Day scored three touchdowns in the second quarter after recovering back-to-back onside kicks.

“It was pretty impressive,” Rebels coach Bill Stubbs said of the Cajuns’ strategy. “You can get away with that once, but to do it twice is pretty rare.”

The Cajuns’ Price Pentagna, who plays kicker, wide receiver and defensive back, had five receptions for 117 yards, scored two touchdowns, recovered both of his onside kicks and kicked a field goal in addition to seven PATs.

The Comets also will be celebrating their homecoming.

West St. John High (3-5, 1-2) got a decisive 38-6 win over winless Sophie B. Wright, even though the Rams did allow Sophie B. Wright its first touchdown of the season in the first quarter.

The Comets had 38 yards of offense in the first half.

When Brandon Cannon learned he was having a son, he began to envision the future. His son would be a... read more