Hero jumps to save family under water in Ruddock 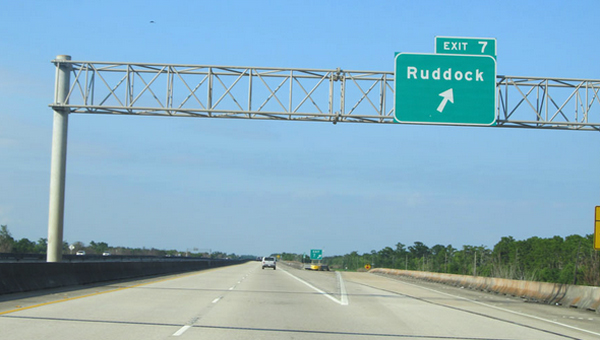 RUDDOCK — Friday was not a day Josh Burns of Ponchatoula was looking forward to.

Just before 9:30 a.m., the former Green Beret and his wife, Felicia, were headed to New Orleans for an appointment at the VA Medical Center where Josh, 35, was set to undergo a spinal epidural for his nagging back pain.

Just as Felicia came around a curve on Southbound Interstate 55, they saw a group of people standing on the side of the road and looking down over the side of the highway.

“I figured it was an accident and somebody had gone over,” Josh said.

Just moments before, a dump truck driven by 36-year-old Drapple Weber of Thibodaux had gone over the side of the elevated portion of the highway. Weber had been travelling north on the elevated highway when a white dually pick-up truck pulling a trailer cut him off and forced him to swerve and go over the side.

When Josh looked over the side, he saw the truck completely submerged and was just in time to see Weber pop up from the water.

“He seemed kind of out of it, but he was yelling something,” Josh said. “We couldn’t really understand him and then he said something about a kid or a family.”

That’s when Josh calmly handed Felicia his phone and wallet and jumped over the side into the murky water 30 feet below.

“I’ll admit there were a few seconds there where I asked myself, ‘Are there cypress (stumps) down there? Am I going to hit something?’” Josh said. “I figured it was deep enough to submerge the truck, it had to be deep enough for me to jump in.”

Once in the water, Josh quickly went to work trying to open the doors on the truck. They wouldn’t budge.

Then, someone from up top sent down a tire iron and a sledge hammer, using an electrical extension cord.

Josh said he used the tire iron to break a smaller window on the truck’s cab, but that wasn’t big enough to get inside. When he reached in, however, he felt a person.

“They were moving,” Josh said. “That gave me a little bit of extra excitement, anxiety. Something.”

Josh then swam to the passenger side and used the hammer to break the window on the door, cutting his hand in the process. He then was able to grab the female passenger who was holding her 4-year-old son and pull them from the wreck.

“They were both conscious,” Josh said. “He actually was very calm and only had, from what I could tell, a small cut on his head. I figure they must have had an air pocket in there somewhere.”

The boy willingly went with Josh, who swam him to the shore.

By this time, Felicia had driven down to the lower highway and called authorities. Another driver followed her and had life jackets.

Josh swam back to the woman with one life jacket and got her to the shore before returning with the other life jacket for Weber.

“He had on some big cowboy boots, so I just hung on to them and we swam to the shore,” Josh said.

According to State Trooper Jesse LaGrange, the passengers in the truck suffered only minor injuries. The dually truck that caused the collision continued north on I-55 and has not been found. Anyone with information about that vehicle is asked to call State Police.

Meanwhile Josh is being hailed as a hero.

“I think it’s totally overblown to tell the truth,” he said. “It was just a matter of timing. A couple of more seconds and it might have gone differently. I guess God had a plan and I’m thankful I was a part of it.”