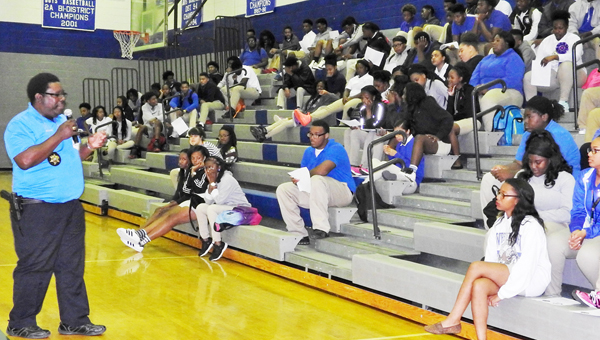 Lt. Freddie Young talks to students about the Pledge Against Gun Violence.

U.S. Attorney Kenneth Polite and the U.S. Attorney’s Office for the Eastern District of Louisiana, as well as school and law enforcement leaders across southeast Louisiana, encouraged schools to participate in the event as part of National Day of Concern about Young People and Gun Violence. Lieutenants Baker and Young led students in the pledge.

The Student Pledge Against Gun Violence is a non-political initiative held in conjunction with the National Day of Concern about Young People and Gun Violence. The initiative honors the role young people, through their own decisions, can play in reducing gun violence.

By signing the Student Pledge, students made promises to never bring a gun to school, never use a gun to settle a personal problem or dispute and use their influence with friends to keep them from using guns to settle disputes.