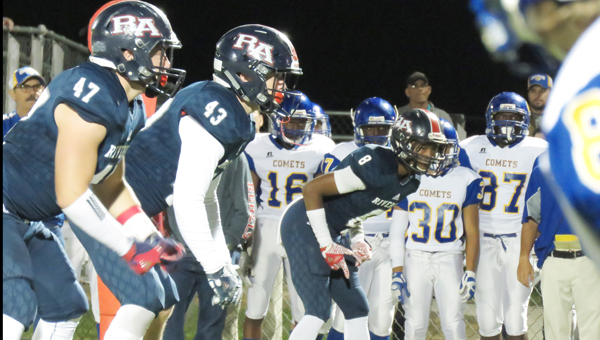 Riverside Academy linebackers Trey Catoire (No. 47), Harrison Heckathorn (No. 43) and defensive back Garland Robertson Jr. (No. 8) prepare for a stop against St. Charles Catholic Friday night in Reserve. The Rebels defense held the Comets to under-100 yards on the night. (Lori Lyons/L’OBSERVATEUR)

RESERVE — St. John the Baptist Parish football fans might have been feeling a little bit of déjà vu after Friday night’s game between Riverside Academy and St. Charles Catholic.

Nearly one year after the Rebels beat their cross-town rival for the first time since 2000, Riverside posted its third straight win over the Comets, 35-14.

That score just happened to match last year’s win by Riverside in the semifinals.

This Riverside “W” was earned by the defense, in particular, the Hs.

St. Charles did put together two solid drives in the second half with Lloyd Nash throwing a 6-yard touchdown pass to Phillip Tran, who later scored on a 1-yard run. The Comets tried to put together another drive late in the game, but were stopped when Hymel broke up a Nash pass and the Rebels took over on downs.

The Rebels, meanwhile, were on a roll, scoring on three of their four first-half possessions to take a 21-0 lead.

On the first Riverside drive, quarterback Jordan Loving (149 yards passing) connected with Avonti Cannon on a 3-yard touchdown with 5:55 remaining in the first quarter.

The third drive covered 42 yards on nine plays and was capped by Loving’s 27-yard pass to Jalen Banks. Elliot Veron’s PAT put Riverside ahead 14-0 with 5:21 remaining in the half.

The Rebels’ defense held the Comets to three plays once more and took over on their own 23-yard line with 2:33 remaining in the half.

This time Riverside had to overcome a slew of penalties, including an offensive pass interference penalty that pushed the ball back to the Rebels’ 14-yard line.

After Loving connected with Cannon and a St. Charles face mask penalty, the Rebels moved across midfield. From there, the Rebels needed nine plays to score, with Jeremy Gibson (69 yards rushing) diving in from the 1 as time expired.

Riverside, which had deferred the opening kickoff, put together a 13-play, 75-yard drive to open the second half, with Jared Butler handling much of the quarterback duties.

Louis Cheneau took over the running game, and scored from the 1 to make it 28-0 with 7:16 remaining in the third quarter.

Then St. Charles woke up.

Nash returned the ensuing kickoff to midfield and, from there, the Comets went on a 13-play drive led by Tran, Nash and Narquez Jones. They got their first offensive first down on the third play — a 6-yard pass from Nash to Tran — with 5:32 remaining in the third quarter.

On fourth-and-goal from the 6, Nash connected with Tran for the Comets’ first score.

Riverside stalled on its ensuing possession and was forced to punt for the first time.

A low snap and a short kick gave St. Charles the ball at the Rebels’ 49.

From there, the Comets took 14 plays to score, going for it on fourth down twice.

A 30-yard pass from Nash to Randall Campbell got the Comets to the 1-yard line and, from there, Tran ran it in with 6:32 remaining.

St. Charles got one more possession that ended with an incomplete pass.

Riverside took over and Cheneau got one more 1-yard touchdown run with 15 seconds remaining.

“The first half I thought we stopped them pretty good,” Rebels coach Bill Stubbs said. “I’m a little disappointed in the second half. We’ll have to get on film and see what happened, but they had the ball entirely too long in the second half. Best one-half of play the entire year. We threw the one interception but, outside of that, I thought we did pretty good. That first drive set the tone.”

Austin Alexander ran for two touchdowns, Kidric Gray ran for two more and Dontrell Davis scored on a 24-yard touchdown pass from Jamal Walters to help the Rams to their first win in October.

Alexander scored on a 4-yard run and an 18-yard run.

Gray scored from 31-yards out and 18 yards. Alexander also scored a 2-point convertion..

East St. John High led the Tigers 27-7 at the half before Terrebonne put together a second half rally and turned this District 7-5A game into a nail-biter.Terrebonne scored 23 points in the fourth quarter.