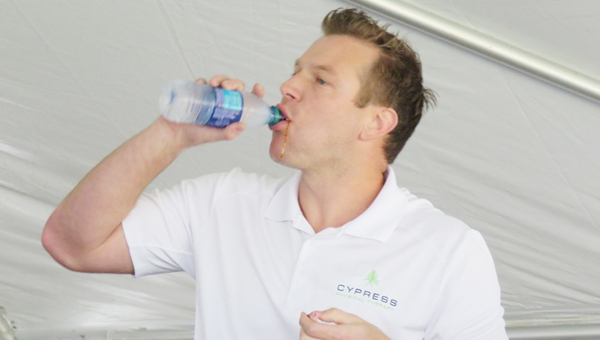 Chris Cancienne grabs a drink of water during his championship performance in the Dang Douille Eating Competition.

LAPLACE — With heaping bowls of sliced Andouille sausage before them, Shaman Bell of LaPlace, Pat White of New Orleans and “Just Travis” of LaPlace eyed up the competition in the fourth annual Dang Douille Eating Competition Saturday.

The three were just minutes away from proving their sausage eating prowess — again — at the 43rd Annual Andouille Festival presented by Marathon Petroleum Company.

With a pig race running nearby, the gumbo-cook off going on next door and a second line parade winding through the grounds, the annual homage to the local links drew thousands under partly cloudy skies for rides, games and a huge menu of food.

While Larry and Monica Zeno stirred their winning gumbo under a tent, “Justin Bieboar” did occasionally win the pig race.

The real competition, however, was under the Lagniappe Tent.

White had come in second and third in his previous tries, while Travis Perrilloux (the assistant director of Emergency Preparedness in St. John the Baptist Parish) was the defending champ.

Then, just before game time, the competition got tougher when in walked 2013 and 2014 champion Chris Cancienne. Sadly he had to miss last year’s competition because it conflicted with his daughter’s birthday party, but was ready to retake his crown.

As master of ceremonies Jerry W. Jones Jr. explained the rules (whoever ate the most of 40 pieces in three minutes would be declared the winner), there was some good natured trash talking amongst the competitors.

“You’re going down,” Bell shouted, while Perrilloux remained “in the zone.”

But when Teen Queen Foley removed her crown and set it forcefully on the table beside her, the competition was on.

A small but most appreciative crowd watched the five chew sausage and gulp water for three minutes, hoping things would not turn ugly (in more ways than one).

After the final countdown, the judges carefully counted the remaining pieces of sausage in each bowl.

Cancienne, meanwhile, left a lowly eight pieces and successfully reclaimed his crown, along with a $300 gift card.

Not only that, he looked ready for more.

“What’s for dessert?” he asked, rubbing his non-existent belly.

“We came here to eat Andouille and that’s what we did. It’s a competition and you compete to win. That’s what I did.”

Perrilloux, meanwhile, issued a challenge for next year.

Arthur Gassen, 92, was the oldest finisher.