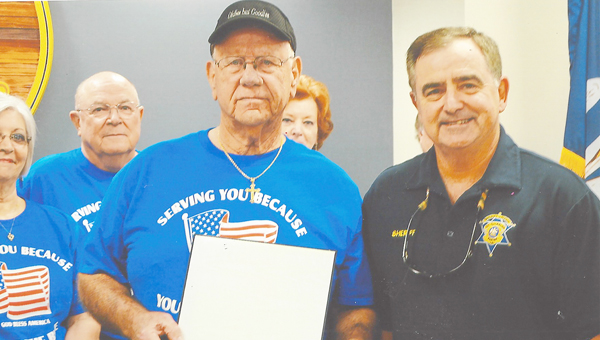 The Oldies but Goodies began as a way for people to gather, socialize and have fun.

“My wife and I were thinking about our friends who had lost mates and I had the idea to start a dance club,” Erick St. Amant said. “I wanted the dances on Sundays, because I believe those are the loneliest days when you’ve lost a spouse.”

Those monthly dances have been held since 2006, on the third Sunday of the month at the Knights of Columbus Hall in Norco. Everyone who attends brings a dish for the potluck, their own beverages and a $10 admission fee.

Oldies but Goodies volunteers, decked out in ‘Serving You Because You Wear the Blue’ T-shirts cooked and served more than 200 meals for members of the St. Charles Parish Sheriff’s Office recently.

In 2009, with the birth of their great-grandson Tripp Roth, the dance club became more than a social gathering. Tripp was born with Epidermolysis Bullosa, a rare disease that causes the fragile skin to tear or blister from minor friction. The family was advised to begin raising money immediately to help with the enormous medical care Tripp would need.

“All I knew how to do was throw a dance,” St. Amant said.

Not only did the dance raise money for Tripp’s care, it caused a snowball effect. Others heard of the family’s need and began to raise money through other endeavors.

Tripp died in 2012, but his brief life continues to impact countless people through efforts of the Oldies but Goodies.

“I figured if we could do that for Tripp, we could do it for other people,” St. Amant said, and the group began to distribute money to meet needs in the community.

In addition to money earned from the dances, the Oldies but Goodies have published a cookbook. St. Amant said people kept asking for recipes for the potluck dishes so they decided to blend them into a cookbook, which is available for $25 by contacting St. Amant at 985-764-9402.

Other ideas come early in the morning. St. Amant said God recently spoke to him at 4 a.m. and told him to show appreciation to the police.

That morning he contacted St. Charles Parish Sheriff Greg Champagne, who approved St. Amant’s idea of providing a meal to the police department.

St. Amant then sought sponsors and volunteers. In addition to donated food, the group was given T-shirts that read, “Serving You Because You Wear the Blue.”

“By noon it was a done deal,” he said. “All our group had to do was buy the plates.”

But they didn’t buy enough. They planned to serve 200 members of the law enforcement community, and on Sept. 27, 220 people showed up for the luncheon at the St. Charles Parish Sheriff’s Training Center.

The next dance is scheduled Sunday at the KC Hall in Norco from 3 to 7 p.m. Those in attendance will likely enjoy an evening of good music, food and friends and the satisfaction of turning a dance into a means of contributing to their community.

And with every beat of the music, Tripp’s memory lives on.